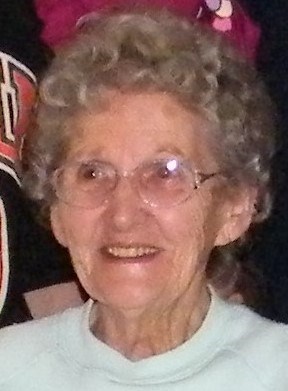 Jeanette Stover Breitmayer (Crandall) Jeanette was born February 15th 1923 and went on her final flower sniffing trip on July 31st 2022. She was born in Helena Montana and adopted at 2 months old by Ed and Thelma Stover. Although Ed was her adopted father, she adored him as much as any daughter loved a father. She spent her early years in Montana but moved to Grants Pass at a young age where she graduated High School in 1940. She had lied about her age to start working in the office of Swede Basin Lumber Company in Grants Pass just a few days after her graduation. Her mother Passed in December of that year while Ed was very sick, and in the Hospital. She had to make all the arrangements for her mother’s funeral and take care of her father all while working a new job. This would become a repeated occurrence the rest of her life. It was March of 1941 when the mill hired a sawfiler and helper. The filer brought his 24-year-old son as a helper. The helper, Fred Crandall swept the young office girl off her feet and they eloped to get married in June of 1941. She was barely 18. With WWII starting, Fred was drafted in December 1941, but due to an illness of his father and two younger brothers to support, he was not inducted until June of 1942 and would not return until Christmas day 1945. This union while it did not last, produced Mom’s four biologic children. Kerry 1946, Jerry 1950, Teri Lee 1952 and Janet 1957. By the early 1970’s Jeanette had moved on and had made contact with an old friend from school, Bud Breitmayer. They would marry in 1972 and she would move to Forest Grove to start her blended family. The Breitmayer/Crandall clan grew and Jeanette and Bud’s was always the meeting place. Bud had two children previously, Bob 1954 and Melinda 1956. Bob would tragically die during a military training exercise in 1982. Each summer Bud and Jeanette would take a “flower sniffing” trip where they and Bud’s brother Ted and his wife Estelle would chase wildflowers across many back roads and trails. The standing rule was if the girls wanted a rock, they would have to carry it to the truck themselves! They would sometimes take grandkids or other family members with them. The following fall/winter we would all go see Bud’s slide show of the summer’s events. Through it all, Jeanette would take care of many “disasters” some minor, some not so minor. But always would try to help. Bud in later years would become ill, battling cancer, and dementia. She cared for him till he passed in 2009. After Bud passed, Jeanette moved to Joseph, where her son could better watch out for her. She did very well on her own for a number of years, always enjoying the snow and cold and “Her Mountains”. She loved her little condo at the lake, and watching the tourists and all the wildlife. She had deer practically come in her house! When it became obvious that she was having trouble taking care of herself, she had to move into an assisted living place, which she hated but grew to realize that it was necessary. She just couldn’t understand that the staff was there to take care of her and she didn’t need to do everything herself and it was ok to ask for help! Jeanette will join her Beloved father Ed, Husband Bud, Eldest Son Kerry, Daughter Teri Lee, and step-son Bob who all preceded her in death. She is survived by her daughters Janet and Melinda, Son Jerry and many Grand Children, Great Grand Children and a great great Grand Son RIP Mom
See more See Less

In Memory Of Jeanette S Breitmayer