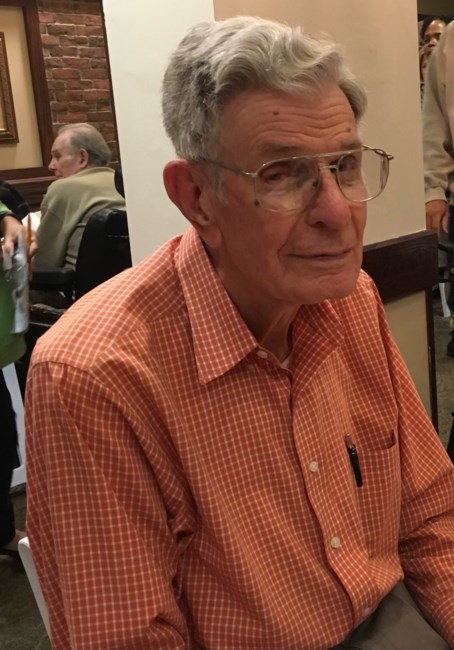 Richard Robert Albers was born Monday, November 28, 1927 in Lee County, Texas and went to be with his Lord and Savior on Wednesday, May 4, 2022 in Grapevine, Texas. He was one of 10 children born to Edwin Gottlieb and Emma Louise (Saenger) Albers. A farmer’s son, born and raised in Giddings, Texas with all the experience and knowledge that came with the territory. He enjoyed fishing and time on his property known as Grass Burr Farm, located in East Texas. It was here where he and Retha moved to after retirement and spent many a day finding projects to work on, gardens to grow, fences to mend, pecans to shell and fig preserves to make and enjoy with others. He was a tireless worker constantly on the go around the home and farm. With his engineering background there were very few items he could not repair on his own. Serving in Japan after WWII and then again in Korea as part of the Korean Conflict assigned to the United States Army Signal Corps while reaching the rank of sergeant, Richard was honorably discharged after sustaining a severe back injury that required surgery to repair. He was a man who was very patriotic, he loved his country, he loved what freedom stood for, he loved his family, and he loved his Lord and Savior Jesus. Richard was introduced to the love of his life, Retha Jean Smith, through his sister Clara. The two wed on January 9, 1954 in Houston, Texas. They quickly settled down to begin a life together and raise a family of 3 children he couldn’t have been prouder of. Richard was a devoted husband to his wife of 64 years; he LOVED his family endlessly. Richard graduated from The University of Houston with an Electrical Engineering degree then he and his family moved to Grand Prairie, Texas where he started working at Chance Vought. He then accepted a position at Texas Instruments where he worked in the D-Seg division on top secret military projects where he then retired from T.I. after 29 years of employment. Richard is survived by Melody Albers Ostman; daughter, Ronald Craig Albers; son, Matthew Gregory and Jennifer Ostman; grandson and spouse, Nicole Renee Martin; granddaughter, Lesley Erin Ostman; granddaughter, Bailey Renee Martin and River Marie Ostman; great granddaughters, as well as many beloved nieces and nephews across the great State of Texas. Richard was the last surviving child of his departed parents, Edwin Gottlieb and Emma Louise (Saenger) Albers. He was preceded in death by his wife Retha Jean (Smith) Albers and daughter Sandra Renee Martin. In lieu of flowers the family requests donations be made to The Alzheimer’s Association. https://act.alz.org/donate
See more See Less

In Memory Of Richard Robert Albers