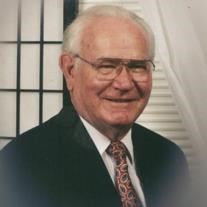 Gid Gates, 95, of Greeley passed away at Grace Pointe Assisted Living on June 1, 2015. Gid was born in David City, Nebraska to Arch and Rose (Styskal) Gates on December 22, 1919. Gid married Fran Timbers on February 4, 1942 in San Luis Obispo, California and they celebrated 64 years of marriage before she passed on March 14, 2006. Gid graduated from high school in David City, Nebraska and went on to college at the University of Nebraska where he met his wife, Fran. In 1938, while in college, he joined the National Guard. He was called to active duty on December 21, 1940 during World War II. He served on Iwo Jima and was a captain in the army until his discharge in 1945. After the war Gid and Fran settled in Alliance, Nebraska. In 1948 they moved to Greeley where they owned the 7up Nesbitt Bottling Company until they sold it in 1975. Later Gid went to work for Wheeler Realty selling commercial real estate. Gid was a Greeley City Councilman from 1971-1975. He served on the Board of Directors for United Bank for 16 years and was president of the Board of the Greeley Country Club. He was a member of Trinity Episcopal Church, Greeley Elks Lodge #809, American Legion and Lost Patrol, VFW, a 70-year member of Masonic Lodge #190, and a 50-year member of El Jebel Shriners. Gid enjoyed traveling, fishing, and oil painting. One of the highlights of his life was the recent trip he took as part of the Honor Flight to Washington, D.C. Gid is survived by his daughter and son-in-law, Nancy and Abran Quevedo of San Diego, California; son and daughter-in-law, Greg and Leslie Gates of Atlanta, Georgia; son and daughter-in-law, John and Patty Gates of Greeley; three grandchildren, Cameron Quevedo of Austin, Texas, and Erin Gates of New York City, New York and Matt Gates of Atlanta, Georgia. He is also survived by two nephews and two nieces, Tom Morgan of Minneapolis, Minnesota, Mary Sneller of Lincoln, Nebraska, Susan Steggs of Parker, Colorado, and Tom Timbers of Alliance, Nebraska. He was preceded in death by his parents; his wife, Fran; sister, Helen Morgan; and brother, Jack Gates. A memorial service will be held on Saturday, June 13, 2015 at 10:00 a.m. at Trinity Episcopal Church with a reception to follow. Private interment will be held at Sunset Memorial Gardens. In lieu of flowers, memorial contributions may be made to Honor Flight Northern Colorado or Trinity Episcopal Church or Shriner’s Hospital in care of Allnutt Funeral Service, 702-13th Street, Greeley, Colorado 80631. Friends may view the online obituary and send condolences at www.allnutt.com. The family expresses their sincere appreciation and thanks for the excellent care given to Gid by the staff at Grace Pointe Assisted Living where he lived since August, 2011.
See more See Less

In Memory Of Gid W. Gates