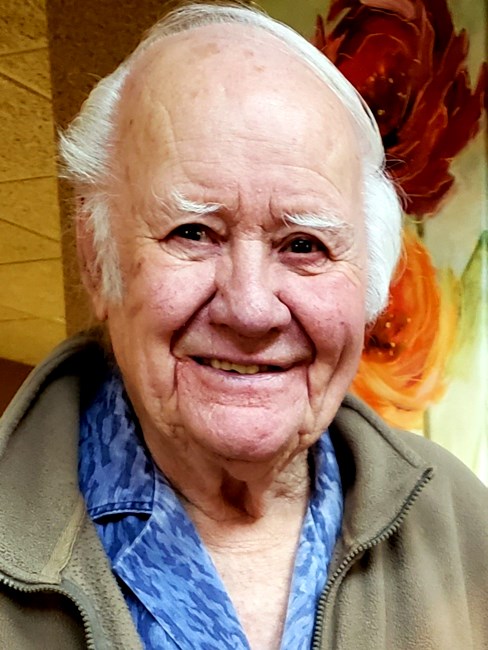 James Oshel Younkin (91) was born on November 4, 1930 in Carlton, Illinois to Virginia and Harry Younkin. When Jim was 9 years old, his family moved to Arvada, Colorado where he and his brother, Don, attended Arvada High School. He lettered in football, basketball and track before graduating in 1951. At the age of 25, Jim began working for Western Slope Gas/Public Service. He enjoyed being outside where most of his work took place. He retired in 1991 after 35 years of service. In 1958, Jim married Norma Andrew and adopted her young daughter, Vicki. In 1960 they were blessed with another daughter, Kristi. After they divorced in 1970, Norma introduced Jim to the love of his life, Ginnie Finley. They married in 1972. Jim’s nickname for Ginnie was “Hezzie” and Ginnie called him “Jimbo”. She had five children from a previous marriage, and Jim enjoyed spending time with them. Jim and Ginnie loved spoiling each other and were happily married over 46 years until her death in 2019. Jim always looked forward to spending time with his friends shooting pool, golfing, bowling, fishing, and bow hunting. After retirement he enjoyed “going to work” which usually meant he was playing pool at the Senior Center in Loveland. He also competed in many Senior Olympic Games playing pool or bowling. Other interests were listening to country music, writing poetry for his beloved Ginnie, playing his guitar and harmonica, leather work, painting scenery (just like Bob Ross!), woodworking, watching basketball and football on TV, and taking naps in the middle of the living room floor. Jim was a gentle man with a quick smile and laugh. He loved animals, his family, and telling silly jokes. He is preceded in death by Ginnie Younkin, son Randy Finley, grandson Johnny Finley, his brother Donald Younkin, and his parents. Jim is survived by his children Vicki (Tim) Ouellette and Kristi (Randy) McDonald of Greeley; Lisa Finley (Gregg Peter) of Loveland; Andrea (Bob) Aughinbaugh of Thermopolis, Wyoming; Diane Finley of St. George, Utah; Craig (Lucinda) Finley of Bridger, Montana; and daughter-in-law Berta Finley of Evans. He is also survived by 18 grandchildren, 20 great grandchildren, and his best buddy, Fred Trupp. Jim and Ginnie’s wish was to both be cremated and their ashes combined so they would be together forever. Celebration of Jim’s life is scheduled for September 10, 2022, 11:00 a.m. at Stoddard Funeral Home, 3205 W 28th St, Greeley, CO 80634. A lunch will follow the celebration at Stoddard.
See more See Less

In Memory Of James Oshel Younkin