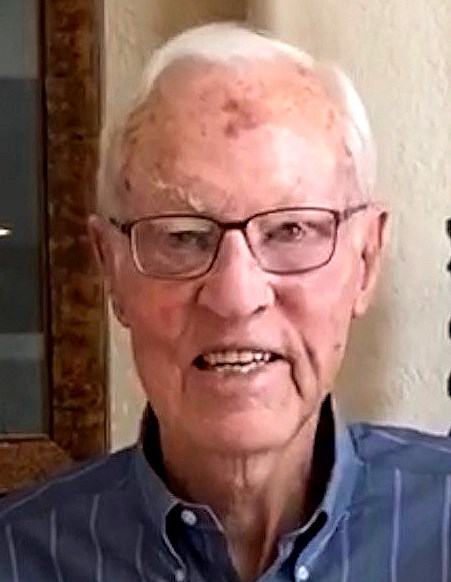 Quintus Colton Fuller, Jr (Bud) passed away peacefully in his home on May 4, 2022 at the age of 97. Bud was born on April 2, 1925 in Milford Iowa to Dr. Quintus Colton Fuller Sr. and Opal Gillette Fuller. He was the youngest of 5 children. He graduated from Milford High School in 1942, and served in World War II. After the war he attended Iowa State University for one year, but then came to summer school at CU in Boulder and stayed. He received his bachelors’ degree from CU in 1948. Bud married Claire Ritter Fuller in August 1948 and they moved to Ontario Oregon, where Bud taught high school math. They returned to CU for summer school for three years and Bud studied accounting. In 1951, they moved to Greeley Colorado where Bud spent most of his adult life as a Certified Public Accountant in his own practice. Bud and Claire raised three children, Patty, Jim and Susie. Bud was known for his positive upbeat attitude, interest in people, kind heart and as a raconteur of the many interesting stories of his life. Bud was an excellent athlete and played basketball and football in his early years, golf in his middle years, and bicycled in his later years. He bicycled regularly until his 96th birthday. Bud and Claire had season tickets to CU football games for 48 years and also enjoyed traveling to away games and trying the local golf courses. Bud was devoted to and appreciative of his family as they were of him. He was the proud owner of the Fuller family farm started by his grandfather near Milford Iowa in 1886 and visited regularly. Bud is survived by his wife Claire; children Patty Fuller-Pratt (Alan), Jim, Susie Fuller Cowles (Bob); granddaughter Liz Cowles Bufton (Beau) and granddaughter-in-law Allison Cowles; and 4 great grandsons, Braylon and Brody Bufton and Caden and Everett Cowles. He was preceded in death by his parents, sisters Grace, Ila and Marion, brother Jim, and grandson David. At Bud’s request, his body was donated to the CU medical school and no service will be held. Special thanks to Kim Andersen who provided caring help for Bud and Claire.
See more See Less

In Memory Of Quintus Colton Fuller