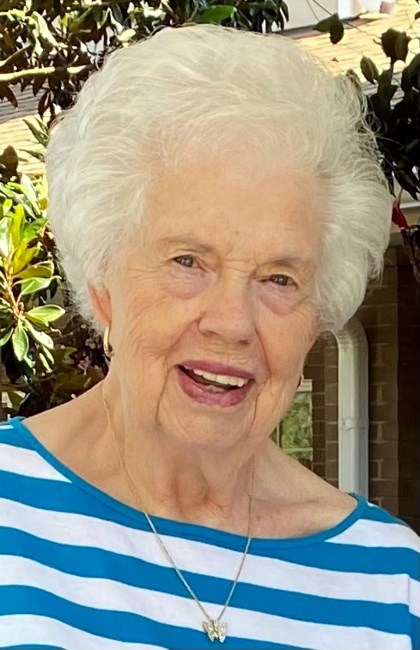 Louise Speaks Elrod, 89, of Greensboro passed away peacefully on Saturday, December 18, 2021 at AuthoraCare Hospice Home in Burlington, NC. She was the wife of the late George Hildt and the late George Elrod. Born on April 21, 1932 in West Jefferson, NC, she was the daughter of the late Robert Lee Speaks and the late Susie Severt Speaks. She graduated from West Jefferson High School and went on to have a career in Telecommunications with Centel/Sprint. She retired after nearly 38 years of service having worked her way up from telephone operator to Assistant Manager. Being someone who loved helping people and having a strong work ethic, Louise had a second career with Belk working for 25 years as a top Sales Associate in many departments with her time as a Bridal Consultant being a place where her skills blessed people of all walks of life. Even though her work caused her to live in several locations, Louise made a point to become a faithful member of a church wherever she lived and supported their projects in any way she could. At her passing she was a member of Mt. Pisgah United Methodist Church in Greensboro. Louise’s love for life was expressed in her many travels and her ability to make even the small events seem like a special celebration. She was a master at organizing parties and had a way of making everyone who attended feel special. She was a mother figure and chief cheerleader for so many family members and friends who will miss her wonderful sense of humor, her direct honesty and her compassionate caregiving. Louise was also a dedicated mother to her poodle Lulu, her schnauzer Schautzie and her dachshund Miss Daisy. In addition to her parents and husbands, she is preceded in death by her brothers Edward Speaks, JR Speaks and Richard Speaks as well as her sisters Laura Ashley, Ruth Dugas and Ruby Matthews. Louise is survived by her sister Lois Poteat and her husband, Jim, of Salisbury and her sister-in-law Linda Speaks of Mooresville. She is also survived by many nieces, nephews, great-nieces and great-nephews who have been blessed by Louise’s faithful love and encouragement as well as so many friends whose lives she touched. The family would like to thank all of the healthcare workers and staff at the Moses H. Cone Memorial Hospital ED and 3 East Cardiac Unit as well as those at AuthoraCare Hospice Home in Burlington who used their skills to make Louise as comfortable as possible and who pour their love on all of us. In keeping with her spirit of helping others, Louise has donated her body for medical research. There will not be a memorial service but there will be a graveside service in West Jefferson at a later date. Memorials can be made to Good Samaritan Ministries of Stokesdale, Inc, c/o Terri Johnson 7769 NC Hwy 68N, Stokesdale, NC 27357, or to The SPCA of the Triad, 3163 Hines Chapel Road, Greensboro, NC 27405.
See more See Less

In Memory Of Louise Speaks Elrod