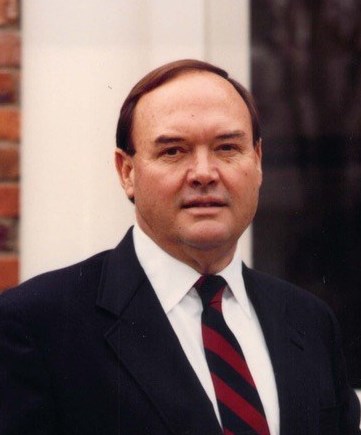 Mr. Richard Turner Howard, 84, of Wilmington, NC died September 27, 2019. The funeral will be held at 11:00 a.m. on Tuesday, October 8 at the First Presbyterian Church, 617 N. Elm St., Greensboro, NC 27401. Following the service, the family will receive friends at the Julian Price home located at 301 Fisher Park Circle. The family will also receive friends on Monday, October 7 from 5:00pm-7:00pm at the Julian Price home. Mr. Howard, known throughout his life as “Dick”, was born on January 3, 1935 in Rock Hill, S.C. to Paul Noble Howard and Pauline Sugg Howard. Dick graduated from Myers Park High School, Charlotte, in 1953. In 1957, he received a bachelor’s degree in Business Administration from the University of South Carolina, where he was a member of the Sigma Chi Fraternity. He also served in the United States Army and was stationed at Fort Jackson, SC. Dick was a long-time Chairman of the N.C. Licensing Board for General Contractors, and on the Board of Trustees for the local National Conference of Christians and Jews, UNC-G, and New Garden Friends School. He was a Director for the Greensboro Chamber of Commerce, the Drug Action Council, the Green Hill Center for North Carolina Art, and the Board of Visitors at Guilford College. The youngest of four brothers, Dick was Vice-President of Paul N. Howard company from 1960, and CEO from 1977 until 1986. The Howard family provided water and sewer infrastructure for millions in nearly twenty countries. For decades the company ranked in the Top 50 of heavy-civil construction companies in the United States. In the Southeast US, where the firm dominated their sector, the Howards laid so much pipe that pipe foundries had trouble keeping pace with the orders from Greensboro. Howard Construction was a rare US firm to work simultaneously in Israel, Saudi Arabia and Egypt. But Dick was especially fond of Haiti, where the company worked from Greensboro to provide clean water to Port-Au-Prince. His interest in aviation and appreciation of progress led him to spearhead a global celebration of the Centennial of Flight as National Vice-Chairman of the First Flight Foundation. On December 17th, 2003 at 10:35 AM, he was honored to welcome President George W. Bush, who tipped the wings of Air Force One as it flew over Kitty Hawk. Dick was universally admired as an extraordinary chef and unparalleled entertainer in the traditional sense. From small dinners, to political fundraisers, to island-wide parties on Figure Eight, Dick was a superb and humble host. In 1985, only 50 years old, Dick served as Honorary Chairman of the Greater Greensboro Open. He was a founding member of Eagle Point Golf Club, a long-standing member of Greensboro Country Club, Figure Eight Yacht Club, and Quail Valley Golf Club in Vero Beach. Mr. Howard was predeceased by his parents, his brothers, Paul N. Howard, Jr., William S. Howard and James W. Howard, and his first wife and mother to his sons, Blanche Fowles Howard. He is survived by his loving and devoted wife Elizabeth Hall Howard, son Richard T. Howard, Jr. of Punta Gorda, FL, son James F. Howard of Greensboro, and son and daughter-in-law George A. Howard and Pamela L. Howard of Raleigh; and grandchildren, William Howard of Plantation, FL, Georgia Howard and Henry Howard, of Raleigh NC ; and his sister-in-law, Lucile Hall Hazelip (Ken) of Mexico. Also surviving is his beloved golden retriever, Gracie. The family would like to thank the wonderful staff at Arbor Landing of Hampstead and Lower Cape Fear Hospice as well as special caregivers Ricque and Clark. In lieu of flowers, memorials may be made to the Alzheimer & Parkinson Association of Indian River County, Inc., 2300 5th Ave, Suite 150, Vero Beach, FL 32960, or a charity of your choice. Online condolences may be made through www.haneslineberryfuneralhomes.com
See more See Less

Visit with family following the service