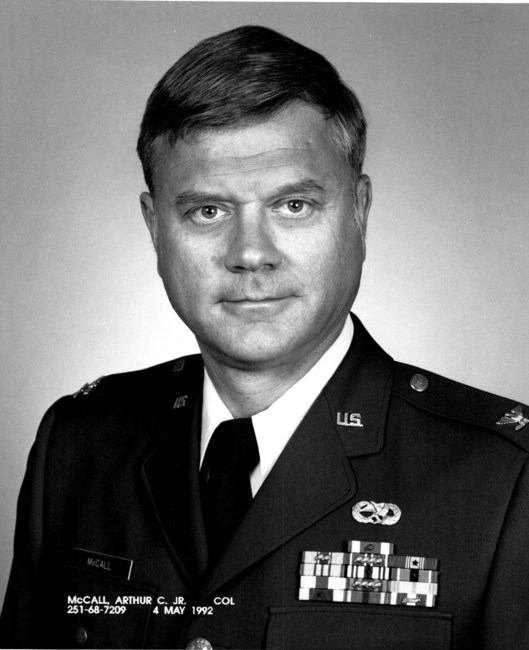 Arthur C. “Artie” McCall, Jr. passed away on July 2, 2022 at the age of 78 in Greenville, SC. He was born September 30, 1943 in San Diego, CA to Arthur C. McCall and Kathryn Williams McCall of Greenville. Artie is predeceased by his wife Kelly Traynham McCall. He is survived by his daughters Clary Lawson McCall (Bobby Granieri) of Asheville, NC, Leigh McCall McGill and Kathryn “Kacey” McCall Hagin (Trevor). Artie is also survived by granddaughters Lawson Granieri, Hilton McGill and May McGill, as well as grandson Liam Hagin. Artie was predeceased by his sister Kathryn “Kitty” McCall Clay (Eddie). He is survived by siblings Frances McCall Jordan (Gary Lee), George McCall and Jane McCall Ellefson (Jimbo). Artie finished Greenville Senior High School in 1961. He received a Bachelors Degree from Presbyterian College in 1965 and after four years of active duty with the Air Force he received his MBA from the University of Georgia in 1971. He returned to Greenville and spent 37 years in the investment banking and securities brokerage business with J.C. Bradford and Company as well as predecessor and successor companies. During his career he served as chairman of the Greenville City Zoning Commission and the Greenville County Planning Commission. He was president of the Securities Dealers of the Carolinas as well as a founding director of Greenville National Bank. Artie served as a vice chairman of Christ Church Episcopal School and was president of the Board of Visitors of Christ Church Episcopal School. Artie also served as the director of municipal finance for Frost, Johnson, Read and Smith. He was a member of the South Carolina Municipal Council and the Presbyterian College Foundation. He was a trustee with W.W. Burgiss Charities and The McCall Foundation, vestry member and chairman of the finance committee of Christ Episcopal Church. His military career consisted of active duty in the USAF from 1966 until 1970. After release from active duty, he joined the Air Force Reserve. He commanded the 81st Aerial Port Squadron at Charleston AFB in South Carolina. He and his unit were called to active duty in 1991 in support of Operation Desert Shield and Desert Storm conducting operations in Iraq, Kuwait and Saudi Arabia. During this period he was Deputy Commander of the Aerial Port Facility at Charleston AFB. He received numerous awards and decorations commensurate with his activities, rank and responsibilities including the Vietnam Service Medal and Southwest Asia Campaign Medal. Artie retired as a full Colonel in 1993. A visitation will be held on Thursday July 7, 2022 from 4:00pm to 6:00pm at Mackey Funerals and Cremations 311 Century Dr. Greenville, SC 29607. A funeral service will be held on Friday July 8, 2022 at 11:00am at Christ Episcopal Church located at 10 N Church St, Greenville, SC 29601. A committal service with military honors will follow in the church cemetery. In lieu of flowers, memorials may be made to Upstate Forever at www.upstateforever.org Fond memories and expressions of sympathy may be shared at www.mackeycenturydrive.com for the McCall family.
See more See Less