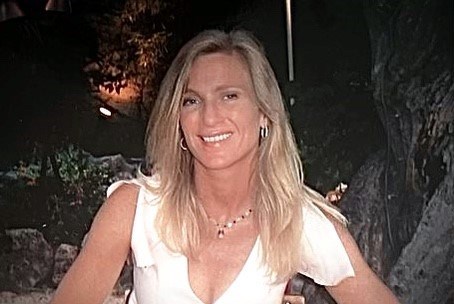 It is with great sorrow and broken hearts that we share the news of the passing of Elizabeth Ann Blair on July 26, 2022. Elizabeth “Liz” Blair was born in New York City on December 24, 1965, the daughter of Thomas J. Blair and Karen M. Blair (deceased) and was raised in Ridgewood, NJ. She graduated from Ridgewood High School in 1983 and graduated from Fordham University in 1987 with a Bachelor of Science in Psychology and a minor in French Literature; Liz studied in France at the Université de Dijon during her Junior year. She was active in sports from an early age - swimming/diving/track and was a varsity cheerleader in high school. Throughout her life, she was an avid skier and tennis player. As a child, she expressed a true talent for art and oil painting and in elementary school, one of her oil paintings won a competition at the Ridgewood Art Institute and was on display at the Smithsonian in Washington, DC. After graduating from Fordham University, she worked for Lehman Brothers and was one of the first women to work at the New York Mercantile Exchange in the trading pit, and then went on to trade oil futures at MBF Clearing, Marc Commodities and Templar Commodities. She earned her MBA in finance from Boston College and upon graduation worked for Miller Freeman where she launched the Global Technologies Venture Capital Magazine. Liz, like her mother, had a keen eye for fashion and interior design and, inspired by her love of everything French, went on to become a force in the interior design business in New York City. She was merchandising director for Conde Nast’s House & Garden magazine, studied interior design in 2001 at the New York School of Interior Design and worked as creative design director for Hearst’s House Beautiful magazine for many years, where among other things, she oversaw the annual Celebrity Showhouse Event (each year finding a showcase property for the country’s top designers to reimagine the rooms and spaces and upon completion would celebrate with a gala and oversaw the publishing associated with the completed showhouse). Liz appeared on multiple television shows such as HGTV, Kitty Barhalemeau as well as Great Estates and Beautiful home. Liz then joined Branca Interior Design Inc (Chicago, NY and Rome), where she was the VP of Marketing and Brand Development. Liz married and had two beautiful children, Taylor and Schuyler and lived in Greenwich, CT and Dallas, TX, and launched Blair Quinn Designs (NY, Dallas, LA), where she was a strategic advisor to top designers Kathryn Ireland, Barclay Butera, Nancy Corzine and Florence de Dampierre. She appeared in the Bravo TV series “Million Dollar Decorator,” and later worked at Robb Report, Robb Report Home & Style magazines where she was Director of Membership Development and Special Projects. Liz was known to her friends, family and colleagues as an elegant, talented, loving and generous person. Although she had great success in her career, her proudest accomplishment was the birth of her two daughters, Taylor and Schuyler. Liz is also survived by her father Thomas J. Blair and stepmother Paula Blair of New York City and Stamford CT, sister Katherine Blair Sullivan, brother-in-law Brian Sullivan, niece Rylee Sullivan, of Glenn Mills, PA, sister Jennifer Blair and niece Madison Blair of West Chester, PA, and brother Thomas Blair of North Stamford, CT. Friends are invited to calling hours at the Gallagher & Son Funeral Home, 31 Arch Street, Greenwich, Connecticut on August 5th at 6:30-8:30pm. Funeral Services will be held August 6th at St. Michael the Archangel Church, 469 North Street, Greenwich, CT at 1pm, followed by a reception at the Indian Harbor Yacht Club, 710 Steamboat Road, Greenwich, CT from 2:30 – 5:30pm.
See more See Less

In Memory Of Elizabeth Ann Blair