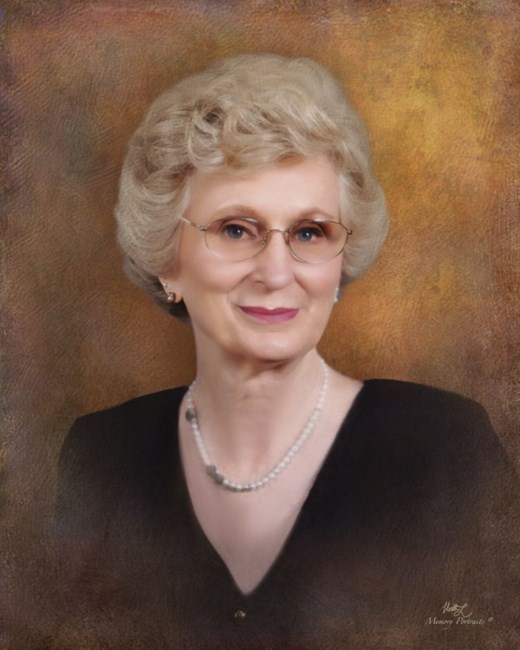 Johnnie June Driscoll was born June 9, 1933 to Bob and Emma Dunn in Washburn, Arkansas and completed this life January 19, in the year of our Lord 2023 at the age of eighty-nine surrounded by her family. Johnnie stood with confidence and determination from the time she could walk. Working hard was instilled into her from the tender age of two, picking up chicken feathers from the yard to her retirement from the Harps Food Stores. She would have said that her most rewarding job was as a mother. Johnnie was the absolute best mother, always supportive of everything her children accomplished. On the 17th of March 1953, she married Billy Dean Driscoll after just three short months of courtship. Together they celebrated sixty-four years of marriage. Fifty-nine of those years were spent raising their children, seeing their family grow and living in Greenwood, Arkansas with five years spent in Sand Springs, Oklahoma, early in marriage. She was an amazing cook and was known for her homemade biscuits, coconut cream pies, chocolate meringue pies and many other dishes. Her passion was feeding her family and always having a full meal on the table. Johnnie graduated with honors from Greenwood High School in 1951. She was a member of the Beta Club and was voted “Most Witty”. She was a barrel racer, alongside her father; they were charter members of the Greenwood Round-Up Club. Johnnie was the first fair queen in Greenwood. She was also a gifted pianist, who could play by ear and her piano talents were enjoyed by many throughout the community. At the age of eleven she was saved at the Greenwood First Baptist Church, committing her life to our Lord and Savior, Jesus Christ. In her commitment, she raised her children in the Christian faith, teaching them to be honest and not be afraid to stand up for their beliefs. Johnnie was preceded in death by her husband, Billy Dean Driscoll; her parents, Bob and Emma Dunn; her brother, Paul Wade Dunn and her brother-in-law, Jim Morgan. She is survived by her four children, Rex and Stephanie Driscoll of Greenwood, Marty and Leeann Driscoll of Greenwood, Marion and Sandy Driscoll of Fort Smith and Penny and Lewis Harris of Greenwood; seven grandchildren, Stephen and Kelly Driscoll of Buffalo, MO, Nicholas and Kristy Driscoll of Greenwood, Aubree and Chase Thornton of San Antonio, TX, Emily and Jake Gordon of Greenwood, Sarah and Brent Burchfield of Greenwood, Chanel and Mark Rosenberg of Fort Smith and Emma Daisy Harris of Greenwood; eight great grandchildren, Madison Branham of Fort Smith, Averie Kelly of Greenwood, Paige Driscoll of Greenwood, Lanie Driscoll of Greenwood, Forrest and Dixie Burchfield of Greenwood and Caroline and Patrick Gordon of Greenwood; one great great grandson, Fletcher Branham of Fort Smith; a sister and brother-in-law, Martha (Morgan) and Larry Williams and a sister-in-law, Dianne Dunn. Funeral service will be 2 p.m., Monday, January 23 at Greenwood First Baptist Church with burial at Liberty Cemetery under the direction of McConnell Funeral Home of Greenwood. Visitation will be Sunday from 2:30 – 5 p.m. at the Greenwood First Baptist Church. Pallbearers will be Rex Driscoll, Marty Driscoll, Marion Driscoll, Penny Driscoll Harris, Lewis Harris, Stephen Driscoll and Nicholas Driscoll. To share a memory or leave a message for the family, please visit www.mcconnellfh.com.
See more See Less

In Memory Of Johnnie June Driscoll