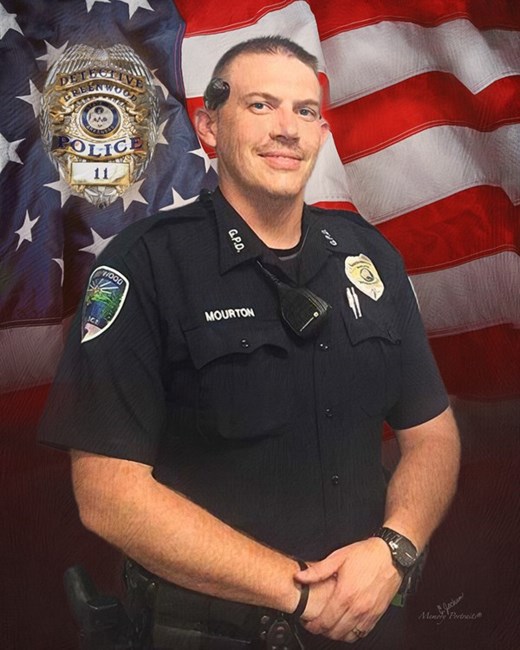 Joshua Drew Mourton, 38, of Greenwood went to be with our Lord and Savior on April 7, 2021. He was born on April 27, 1982 in Fort Smith, Arkansas to Steve and Denise Mourton. Josh grew up in Waldron, Arkansas with his sister, Mandy Foster. He graduated from Waldron High School, class of 2000. He attended Westark College and SAU. He received his Associates of Professional Studies in May 2015. He started his law enforcement career as a jailer/dispatcher for the Scott County Sheriff Department in 2001. He eventually became a deputy in 2004. Then in 2012 he started with the Greenwood Police Department as a patrolman. He became an investigator and school resource officer in 2016 for the Greenwood Schools. Josh married the love of his life, Ashley (Holcomb) Mourton in June 2005. They celebrated almost 16 years of marriage together. Josh and Ashley enjoyed hunting, fishing, playing ball and just doing life together. They had two amazing sons, Griffin and Coltyn Mourton. Josh adored his two boys and loved to tell others about them. Josh had a heart of service and cared deeply for the community that he served as a law enforcement officer. Josh was what most called a gentle giant. He was a true friend, would help anyone out that he could and never complained. Josh was a member of Home Church Chaffee Crossing and knew he was going to be walking the streets of gold with our Lord. Josh was preceded in death by his paternal grandparents, Jim and Melba Mourton and grandfather, Kenneth Edmoundson. He is survived by his wife, Ashley Mourton and two sons, Griffin and Coltyn Mourton of the home; his parents, Steve and Denise of Waldron; his sister, Mandy Foster and husband, Jon of Hackett; grandmother, JoAnne Edmoundson; father-in-law and mother-in-law, Roger and Jana Holcomb of Parks; sister-in-law, Brittanie Alley and husband, Dean of Mississippi; brother-in-law, Brandon Holcomb and wife, Cindy of Waldron; brother-in-law, Camdon of Parks; nieces and nephews, Shayla and Hayden Foster, Elizabeth, Anna, Jessilyn and Jacob Alley and Brayden Holcomb; along with aunts, uncles, cousins and countless friends. Josh’s visitation will be Monday, April 12, at McConnell Funeral Home in Greenwood from 1 – 7 p.m., where the family will visit with friends from 5 – 7 p.m. His celebration of life service will be Tuesday, April 13, at the H.B. Stewart Bulldog Arena with burial at Clarks Chapel Cemetery in Dayton. Pallbearers will be Shawn Ridenhour, Blake Wright, Camdon Holcomb, Brandon Holcomb, Hayden Foster, Jimmy Russell, William Dawson and Joey Deer.
See more See Less

In Memory Of Josh Mourton