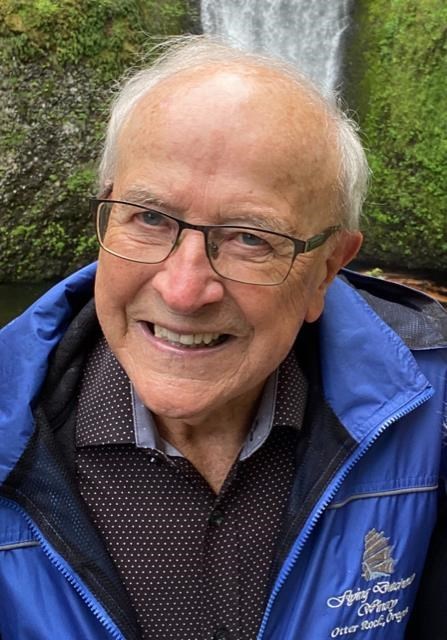 Vernon Dale Kirstein passed away peacefully in his sleep on May 10th, 2022 at home in Gresham, Oregon. at the age of 94. Vern lived an exceptional life of service as a pastor, of devotion to all his family, and as an inseparable partner to Mildred, his wife of 70 years. Vern was born on June 4, 1927 to Richard Kirstein and Mattie Kreuger Kirstein in Winfred, South Dakota. Vern was a man of books and letters, and he wrote his autobiography Prairie Boy about his Depression-era roots growing up on his family’s farm in South Dakota. Farm work was grueling and never ending, but Vern was fortunate to have an exceptional teacher in the one-room schoolhouse where he learned to love education in general and reading in particular. Vern graduated from high school in nearby Canova, South Dakota, and joining the Navy in 1945 took him to San Diego where as a Yeoman Second Class he polished his flawless typing skills that he put to good use for the rest of his life in his ministry and family letters. Returning to South Dakota, he earned his Bachelor's Degree from Sioux Falls College in 1951. In that same year, he married his beloved wife, Mildred, and as newlyweds they moved to Berkeley, California, where he earned his Masters of Divinity at Berkeley Baptist Divinity School. In 1954, now as an ordained minister, Vern pastored at churches in Washington. He was called to the First Baptist Church in Gresham, Oregon in 1965. Vern led the church for 24 years before retiring in 1989. During those years, he was active in the community in numerous ways, teaching at Mt. Hood Community College, serving on the Gresham Barlow School Board, and volunteering for many years in the Rotary Club, serving as President from 1977-1978. Following his retirement, Vern continued to minister for many years in the community, officiating at funerals and weddings in his warm and personal manner. At the time of his passing, he and Mildred had been members of Westminster Presbyterian Church in Portland for 15 years. Vern and Mildred made their home a welcoming place to uncounted numbers of congregation and community members through the years. and he is renowned for his distinctive handwriting on personal notes expressing thanks or support he sent to thousands of people. He was an unwavering supporter of his grandchildren, adored his great-grandchildren, and quietly touched the lives in generous and positive ways of anyone who knew him. Vern found renewal working in his rose gardens, inspiration and learning in his books, and affirmation of his faith in the Bible and lifelong friendships with his Berkeley colleagues. He found time for hiking, summiting several peaks in the Cascades, and international travel, including China, Israel, and Europe. Throughout his life, there is little doubt that his favorite pastime was reading in his chair in the living room, and there is also little doubt that his favorite subject was Abraham Lincoln, whom he deeply admired. ‘Vern’, ‘Pastor’, ‘Dad’, ‘Grampa’, ‘Grampa G’ will be deeply missed by his family and friends. Vern is survived by his wife Mildred, his sons Richard Kirstein (Gail) of Coburg, Oregon, Brad Kirstein (Tracy) of Aliso Viejo, California, 7 grandchildren and 3 great-grandchildren. Vern is also preceded in death by brother Floyd Kirstein, sister Helen Larson, and his son Rodney Kirstein A memorial service celebrating his life will be held at 1:00 pm on May 19th at Westminster Presbyterian Church 1624 NE Hancock, Portland, OR 97212. In lieu of flowers, the family suggests donations reflecting Vern's love of education to: P.E.O. Oregon State Charitable Trust; address to: Ann Powell, Education Scholarships, 15134 SE 122nd Ave, Clackamas, Oregon, 97015.
See more See Less

In Memory Of Vern Kirstein