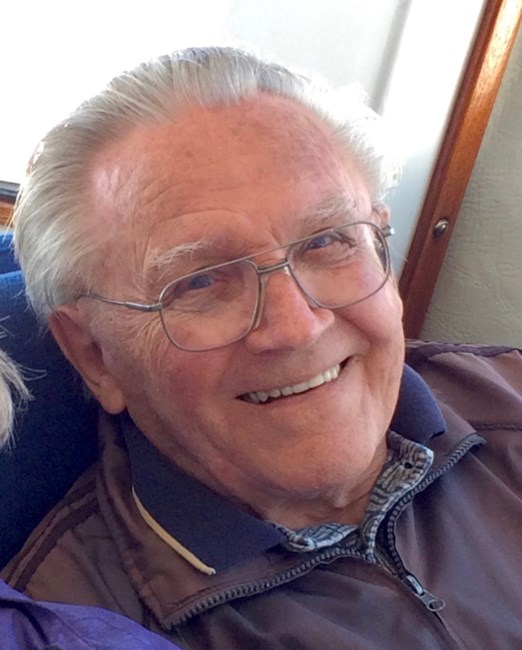 Bill Miller was born on December 29, 1928, in Parsons, Kansas, and raised as an only child by Maybelle Ehman and William Earnest Miller. Most of his youth was spent in Independence and Hoisington, Kansas, and he graduated from Independence Junior College where he was the quarterback on the football team, and then attended Tulsa University. He enlisted in the Navy as a SeaBee in 1946 and was stationed on the island of Adak, Alaska. He was recalled in 1950 and served at Manchester, Washington, providing fuel to Navy ships in the Puget Sound area. He did a lot of reminiscing when he traveled to Washington, DC in 2016 on an Honor Flight with other veterans and his oldest son, Mark. He met and married Eleanor (Ellie) Olson in Oberlin, Kansas. His job as a "doodlebugger" in the oil and gas seismograph industry caused him to travel all throughout the Midwest exploring for oil until 1957, when he moved his family with four-year-old daughter, Joni, to Portland, Oregon, where his father lived. He ran his father's dry cleaning business while his father recovered from a heart attack. He then worked several jobs in Oregon, including surveying during construction of I-84 in the Columbia Gorge. He also worked on a coffer dam at the bottom of the Columbia River in 1958 during construction of the second span of the Interstate Bridge. For a few years he got into the restaurant business and managed nine Obie's Restaurants around Oregon. Then, after working for the State of Oregon Judicial System for 19 years, he retired in 1994. Bill and Ellie loved traveling in their motor home and for 25 years they made many friends on RV trips around the country. Bill also enjoyed boating and camping with his family, spending several summers in tents on Reed Island in the Columbia River and commuting every morning across the river to work. Many boating vacations were enjoyed on Orcas Island in the San Juans. Love of living near the water resulted in their purchasing a floating home on Sauvie Island where the family lived for 13 years, after which they moved to Fairview, Oregon. At the age of 85, he decided it wasn't too late to try to find his birth family. Research by his daughter, Lori, and DNA testing located a whole new tribe of living maternal relatives in Illinois, including one full brother and two half-brothers. This was a real highlight in his life, having grown up as an only child. A few years later, his paternal family was located, bringing a half-brother and a half-sister from Illinois into the family's brimming lives. Many trips were made between Portland and Illinois, but he still had time for golf twice a week at Glendoveer. He was proud of having such a large and wonderful family. He even insisted on keeping the original Tinker Toys for each generation. He also loved his church family and particularly the pleasure of helping lead the TAL group of senior citizens for many years. As his steps slowed and he gave up golf, going to church was his lifeline. He mainly stayed behind the scenes but loved the traditional Lutheran liturgy and hymns with a little Willie Nelson thrown in. Bill died on August 27, 2022, following complications from a fall. He leaves behind his wife of 69 years, Ellie, a sister, Patricia Heit, in Illinois, and four children: Joni (Doug) Lyver, Mark (Laurie) Miller, Lori (Bill) Prouty, and Mike (Dree) Miller; eight grandchildren: Troy (Lisa) Lyver, Heather (Sean) Patrick, Melissa (Joe Sheilds) Miller, Krystal (Brad) Marshall, Tyler (Natasha) Miller, Spencer Prouty, Cody Prouty and Lexie Miller; six great grandchildren: Jacob, Megan, Lauren, Cole, Connor and Ryan. He was preceded in death by his grandson, Austin Miller, and seven siblings in Illinois: Paul, Dick, Milt, Robert, Donnie, Esther Faye Jones, and Albert "Butch" Fisher. Bill remained trustworthy, loyal, helpful, friendly, courteous, kind, cheerful, thrifty and reverent all of his life --- and yes, he was very witty! We could tell by the smile on his face that family get-togethers were a joy to him. He and his family wish you God's peace. A Celebration of Life is planned for Sunday, September 18, 2:30 PM at Trinity Lutheran Church, 507 W. Powell Blvd., Gresham, OR 97030. Memorial gifts may be made to the Memorial Fund at Trinity Lutheran Church. Arrangements by Bateman Carroll Funeral Home. Bill will be placed at Willamette National Cemetery in honor of his service.
See more See Less

A Celebration of Life Gathering