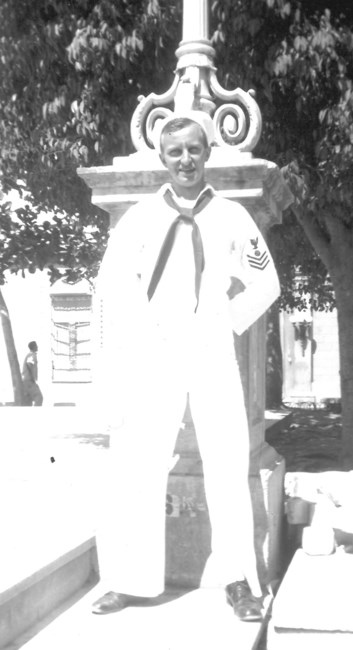 Eugene (“Gene”) Thomas Ignasiak passed away on Friday, July 2nd, 2021, at the age of 97. He leaves behind his loving wife of more than seventy years, Dorothy Ann (Reckio) Ignasiak. Gene is survived by his four children, Susan, Michael, Gregory, and Robert Ignasiak (Francine) as well as his grandson James Ignasiak. He also leaves behind several cousins, nieces, and nephews. Gene was born in Detroit, Michigan, on December 22, 1923, to father John Ignasiak and mother Anne (Mentlikowski) Ignasiak. He was preceded in death by his siblings Florence, Bernard, and Norbert. Gene served as class president of 525 students in the graduating class of Northeastern High School in June, 1941. After attending the University of Detroit, Gene enlisted in the United States Navy and served from September 21, 1942 to December 24, 1945. He was aboard the PC 1260 and YAG 18, vessels deployed for convoy and other duties in the Caribbean and South Atlantic Seas. Gene had an Honorable Discharge as Electrician’s Mate First Class and received the Victory Medal and Good Conduct Medal. When telling about his Naval service, Gene always ended by saying, “It was an honor to serve.” Gene began studies at the University of Michigan, College of Engineering in February 1946. He graduated in February, 1950, with a Bachelor of Science in Mechanical Engineering. He then worked in the automotive industry from 1950 to 1987. His employers were Packard Motor Car Company, the Budd Company, Fisher Body, and the Ford Motor Company. During his twenty-five year tenure at Ford as a principal design engineer, Gene was presented with four major awards (i.e., a new car or the equivalent in U.S. savings bonds) for adopted cost-savings ideas not related to his area of responsibility. He was a member of the American Society of Body Engineers and the Edgard DeSmet Alumni Association. A long-term resident of Grosse Pointe Woods, Gene was actively involved in several community organizations. He served as President for The Association for Retarded Citizens Grosse Pointe/Harper Woods. He was also a lifetime member of the Scarab Club in Detroit for his photographic skills. He was a member of American Legion Post 303. Gene also was a member of the Patrol Craft Sailors Association. For over fifteen years, he and his wife Dorothy enjoyed world travel as Nomad travel club members. Gene is remembered as a devoted husband, father, and grandfather who was committed to faith, family, and his country. He will be dearly missed. Funeral visitation will be held at A.H. Peters Funeral Home in Grosse Pointe Woods on Wednesday, July 7th, from 3:00 p.m. to 9:00 p.m. with a special veteran’s service conducted by American Legion Post 303 at 7:00 p.m. A funeral mass is scheduled for Thursday, July 8th, at 10:00 a.m. at Our Lady Star of the Sea in Grosse Pointe Woods. The mass will be preceded at 9:30 a.m. with a final visitation service. A burial service will follow at Resurrection Cemetery in Clinton Township. Condolences and memories may be shared with family and friends by visiting www.dignitymemorial.com. In lieu of flowers, donations may be made to Boy Scouts of America Troop 330 and the Capuchin Soup Kitchen.
See more See Less

In Memory Of Eugene Thomas Ignasiak