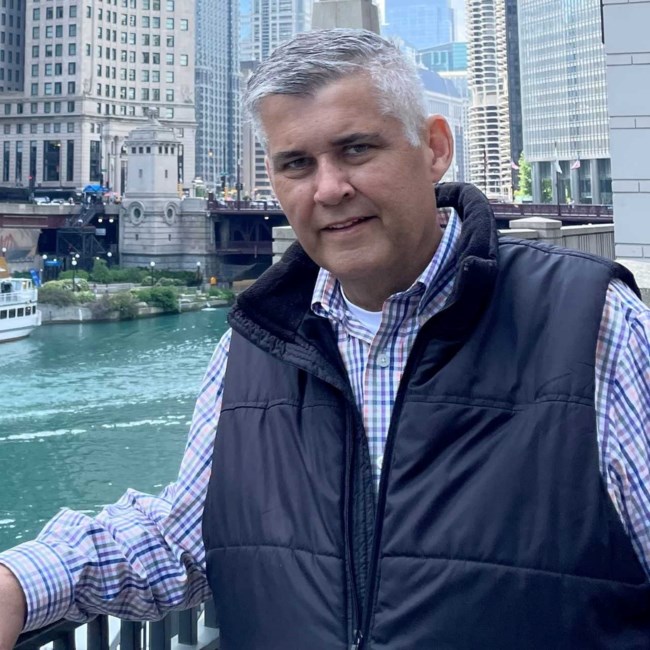 David Andrew Carbol age 51, passed away on Wednesday, September 21, 2022, in Lake Forest, IL after a courageous battle with pancreatic cancer. Dave and his wife have been residents of Gurnee for the past 26 years. David grew up in Lake Forest, IL and was a graduate of Lake Forest High School. He attended the University of Illinois, School of Architecture where he was a member of Alpha Rho Chi, the Campus Honors Program, and was selected to spend a year internship at an architecture firm in Osaka, Japan. It was while at U of I that he met Angela Albright, also an architecture major, who, on September 21, 1996, became his loving wife. They had a wonderful marriage of 26 years, with the only major disagreement between them being over the Bears/Packers rivalry. David had countless friendships over the years including many who were in his Servants Youth Group at Winnetka Congregational Church. They created a strong bond that lasted into adulthood. David started his architectural career, working alongside Angie and wonderful colleagues, which are still dear friends, at Legat Architects in Waukegan, IL. David then went on to work for Partners in Design in Kenosha, WI where he enjoyed his work on a wide variety of projects and was again blessed to work with a wonderful group of friends. In addition to his wife, Angie, David is survived by his son Benjamin Thomas Carbol; mother, Betty Williams Carbol; in-laws, William and Cynthia Albright; brothers-in-law, Chris Albright (Emily), Greg Vannett (Shelley); and niece and nephews; Logan, Annalise, Clayton, Dylan, Mason and Ryan. He was preceded in death by his father, Thomas Joseph Carbol in 2000. David was loved by his family and friends and will be missed by many. He was a problem solver, a helper, a healer, had a great sense of humor and had a creative mind which brought joy to others. Scouting became a passion for David, and he loved sharing this experience with Benjamin. David was an animal lover, especially yellow labs. He has joined his father on earth with his Father in Heaven, and we take comfort in that fact. A memorial service will be held on Friday, September 30th at the Winnetka Congregational Church, 725 Pine Street, Winnetka, IL 60093. An organ tribute will begin at 10:30, service at 11:00, reception to follow with light refreshments. In lieu of flowers, memorial donations can be made to Troop 672 - Dave Carbol Memorial to support Scouting. Checks can be written to Troop 672 Dave Carbol Memorial and sent to Wildwood Presbyterian Church, 18630 W. Old Gages Lake Rd., Grayslake, IL 60030 Fond memories and expressions of sympathy may be shared at www.MarshFuneralHome.com for the Carbol family.
See more See Less

In Memory Of David Andrew Carbol