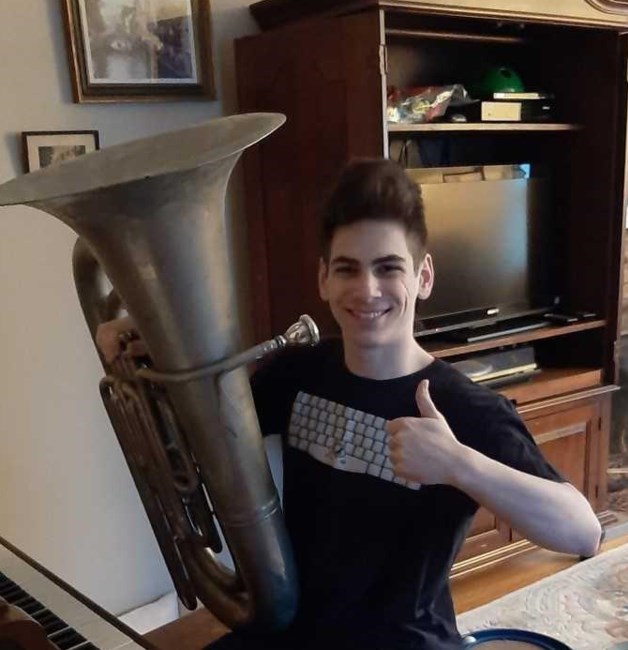 Jordan Louis Falco, born May 8, 2003, died suddenly and tragically on April 29th, 2020 in Haworth New Jersey. He was 16 years old. He was a lifelong resident ofDemarest, New Jersey and was in his junior year at Northern Valley Regional High School in Demarest at the time of his passing. Jordan suffered from severe clinical depression which contributed to his death. Jordan played the sousaphone for the Northern Valley Demarest marching band, the tuba for the wind symphony, and trombone for the jazz band and pep band. He also held theposition of head librarian for all instrumental bands and orchestras. He was a member of the Thespian Society and the audio engineer for all shows at Northern Valley Demarest including the 2020 productions of “The Addams Family” and “Noises Off.” He was amember of Mock Trial and Student Senate. Since the age of twelve up until the time of his death he worked for the school district’s student aftercare program (SACC) where he supervised younger students and helped them with their homework. He volunteered forArtsRock, a not for profit organization producing live performing arts in Rockland County, NY. Jordan was known for his pun T-shirts, his oversized hair, his infectious smile, his kindness and his willingness to help those in need. One Northern Valley Student commented; “I don’t know what was bigger, his heart or his hair.” He was also known for his wry sense of humor. After receiving an award for perfect attendance in 2018, he commented, “You know, they don’t give this to you for just showingup.” He is survived by his Mother (Dara Falco), Father (Frank Falco), older Brother (Alec Falco), 2 Grandmothers (Louise Falco and Ellen Arzt), Grandfather (David Arzt), and numerousAunts, Uncles and cousins. On the evening following his death, numerous Northern Valley Demarest students attended an impromptu candlelight vigil for Falco at the Demarest Gazebo on County Road. Thevigil was halted by the authorities due to curfew during the Covid 19 crisis. After the vigil, over 100 candles were left at the scene.
See more See Less

In Memory Of Jordan Louis FALCO