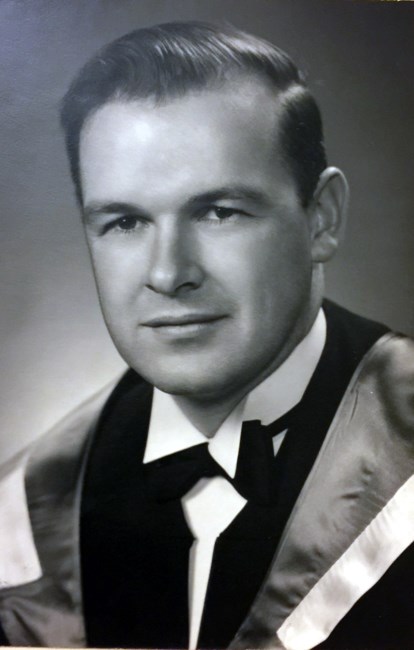 Dr. Paul Louis Landrigan died peacefully, on Saturday, March 30, at the age of 93, with family by his side. Paul was known for his kind heart and compassion for others. He was a superb physician, wise teacher, a man of great faith and, most importantly, a devoted family man. He was a wonderful husband, father, father-in-law, grandfather, brother, uncle, cousin and friend. Paul was born in Everett, Massachusetts, on August 5, 1925, to Martha Jane (Lanigan) and Joseph Montague Landrigan. Paul experienced many challenges in his early years: when he was two years old, he lost his father in a work accident; at seventeen, he contracted tuberculosis and spent three years convalescing, six months of this time in a sanatorium; he was exposed to an atomic bomb during his military service; and he descended 3300-feet down a coal mine as a member of the initial rescue team at the Springhill mine disaster. He drew strength from these challenges and became the man we all knew him to be. After his father’s death, his mother moved the family to Sturgeon, Prince Edward Island. Funds raised at a charity baseball game that involved the Boston Red Sox, Babe Ruth and Lou Gehrig allowed her to buy a small farm on Cambridge Road, where Paul grew up and was educated in the community’s one-room schoolhouse. Paul won a scholarship to attend St. Dunstan’s University in Charlottetown and graduated cum laude in 1949. He then joined the Canadian Airforce as a flight lieutenant, which enabled him to attend Dalhousie Medical School where he received his M.D. in 1953. He continued with post-graduate studies in internal medicine at Dalhousie University and the University of Toronto. In 1962, he received a fellowship from the Royal College of Physicians and Surgeons of Canada. He also was awarded the McLaughlin Fellowship to study the specialty of Diseases of the Chest at the Royal Brompton Hospital, London, England. He returned in 1963 and was appointed the first Head of the Department of Respirology at the Victoria General Hospital. He was also a full professor at Dalhousie University School of Medicine, and subsequently chief of medicine at the Halifax Infirmary. He was a fellow of the American College of Physicians and the American College of Chest Physicians, and received the Regional Award for Medicine from the Royal College of Physicians and Surgeons of Canada. He was a governor of the American College of Chest Physicians; president of the Canadian Thoracic Society, a member of the board of directors of the Canadian Lung Association; an examiner for the Royal College of Physicians and Surgeons of Canada; and has published numerous medical articles. Paul was also a man of great faith and a devout member of St. Thomas Aquinas, where he sang with the choir for many years. In 1986 he was named a Knight of Malta for his charitable works. He was also Grand Knight and District Deputy of the Knights of Columbus. In his spare time, Paul enjoyed many sporting activities, displaying his unique corkscrew swing at the Ashburn Golf Club, participating in Saturday curling at the Halifax Curling Club, salmon fishing in Newfoundland & Labrador, hitting the slopes near and far, and in recent years, cheering for his Halifax Moosehead’s. But there was nothing he enjoyed more than relaxing at his cottage on Prince Edward Island with family and friends. Paul is survived by his children and children-in-law, Blair (Victoria), Deep River, ON; Gary (Janet) Charlotte, VT; Glenna (John Jenkins) Lunenburg; Mark, Vancouver, BC; Janet, Halifax; and David (Hayley Clarke), Halifax; daughter-in-law Daisy, Vancouver, BC; his grandchildren Jacqueline Jenkins, Krista Landrigan, Nicholas Landrigan, Morgan (George) Nikolov, Gordon (Lindsay) Landrigan, Sandy Jenkins, Hillary Landrigan, Matthew Landrigan, Rachel Landrigan, Martha Jenkins and Kelly Landrigan; his great grandchildren Everett Paul Landrigan and Danica Mary Nikolov; his brother-in-law David (Laurie) MacNeil; and many cousins, nieces and nephews. Besides his parents, Paul was predeceased by his wife Mary, son Robert, brothers Lawrence and Joseph, and sisters Eleanor and Phyllis. The family would like to thank the many dedicated people who attended to their father's care, with special thanks to Jeremy Lecciones, Catherine-Anne Murray and the team at Parkland at the Gardens. A visitation will be held at Cruikshanks Funeral Home on Friday, April 5 from 4:00 PM to 7:00 PM. A funeral mass will take place at St. Thomas Aquinas Roman Catholic Church on Saturday, April 6 at 10:00 AM concelebrated by Fr. Owen Connelly and Fr. Gordon MacLean. A reception will follow at the Old Ashburn Golf Course at 3250 Joseph Howe Drive. Interment will be at a later date. In lieu of flowers, donations may be made to The Dr. Paul Landrigan Bursary at Dalhousie University, Office of Advancement, Dalhousie University, PO Box 15000, Halifax, Nova Scotia B3H 4R2, online at www.giving.dal.ca or by calling 902.494.6862.
See more See Less