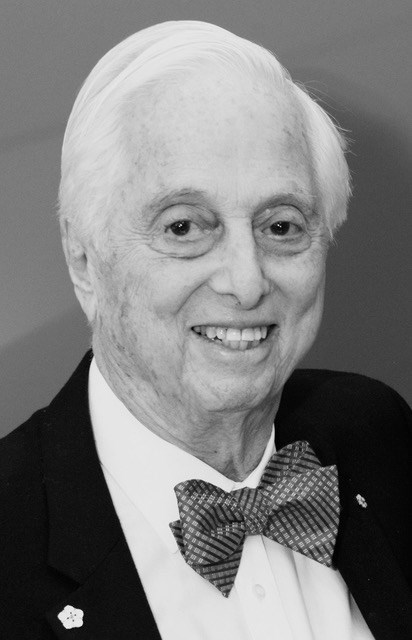 Richard B. Goldbloom, OC, MD, FRCPC He was born to the late Alton and Annie (Ballon) Goldbloom, in Montreal, Quebec. He is predeceased by his beloved wife Ruth (Schwartz) and his brother Victor, and survived by his children Alan (Lynn), Barbara (Tony Hughes), and David (Nancy Epstein), as well as his grandchildren Michael (Kelly Ludgate), Kate (Michael Bozek), Ellen (Joshua Kardish), Amy (David Frenkel), Stephen (Jenny Maryasis), Daniel (Jessica Duffin Wolfe) and Will (Zachary Russell). He also leaves great-grandsons Sam, Ben, Parker, Jack, Cole, Wolf, and Lucas, great-granddaughters Rachel, Lia, Kensington, and Maya as well as many nieces and nephews. He is survived by his sisters-in-law Diane, Diana and Inez Schwartz and Sheila Goldbloom. He is predeceased by members of the Cape Breton family into which he married and whom he loved, including his mother-in-law Rose Schwartz, sister-in-law Edna Schwartz, and brothers-in-law Joseph, Irving, Harold and Bram Schwartz. Raised in Montreal, he attended Selwyn House School and Lower Canada College before completing an undergraduate degree and medical education at McGill University. As a medical student, he married the love of his life, Ruth, and they began a journey of 66 years of unmitigated happiness together. He trained as a pediatrician at the Montreal Children’s Hospital and at Boston Children’s Hospital. On his return to Montreal, he was for a time in a private pediatric practice with his father and brother Victor before committing to a full-time academic career at McGill University and the Montreal Children’s Hospital. In 1967, he was recruited to be Professor and Chair of the Department of Pediatrics at Dalhousie University in Halifax, Nova Scotia and inaugural Physician-in-Chief and Director of Research at the newly constructed Izaak Walton Killam Hospital for Children. He held these positions for the next 18 years. He served as Chancellor of Dalhousie University from 2001-2007. He published over 140 scientific research papers in such diverse areas as hematology, nutrition, cystic fibrosis, medical education, and the value of screening for disease; his textbook Pediatric Clinical Skills has become widely used. He also co-edited the book Preventing Disease: Beyond the Rhetoric, and for many years served as editor of the popular newsletter Pediatric Notes. In 2013, he published his autobiography, A Lucky Life. He held visiting professorships and distinguished lectureships throughout the world, including the University of Oxford, Shanghai Medical University, Tel Aviv University and other universities throughout Canada and the United States. In 1986, he was named Sir Arthur Sims Commonwealth Traveling Professor, and visited universities and hospitals in India, Hong Kong, Singapore, Australia, New Zealand, South Africa, Zimbabwe and the United Kingdom. He was a Past President of the Canadian Pediatric Society. He served on the Executive of the Medical Research Council of Canada and from 1984-94 chaired the Canadian Task Force on the Periodic Health Examination. He especially enjoyed chairing the Maritime Rhodes Scholars Selection Committee for 15 years, as he always relished the presence of young and talented people. He and Ruth quickly integrated themselves into the academic, political, cultural and social life of Halifax. He became President of the Atlantic Symphony Orchestra, reflecting his lifelong passion for music and his considerable talent as a pianist; music and musicians were always close to his heart. One of his favourite places to sit was at the keyboard of his Steinway, revisiting Chopin and Brahms and learning new repertoire. He was the first Board Chair of the Waterfront Development Corporation of Halifax and founding Chair of the Discovery Centre, an interactive children’s museum of science and technology in Halifax. He became an avid sailor and golfer, and his unrelenting humour could be heard across fairways and on the high seas. He received many honours over his career, including Officer of the Order of Canada, The Queen’s Silver and Diamond Jubilee Medals, The Order of Nova Scotia, and honorary degrees from McGill, Dalhousie, and Acadia University as well as University College of Cape Breton. He received the Ross Award from the Canadian Pediatric Society and the F.N.G. Starr Award from the Canadian Medical Association, its highest honour. He was particularly moved when the hospital he led for much of his career named its newest building the Richard B. Goldbloom Pavilion for Research and Clinical Care. In 2016, he was inducted into the Canadian Medical Hall of Fame. He placed high priority on not taking himself too seriously and on drawing energy, enthusiasm and insight from the young people he cared for and the many generations of students he taught. He was happiest surrounded by the four generations of his family – each one a new audience for his oldest jokes. His love of laughter was infectious and his core temperament of equanimity endured even as his deteriorating memory robbed him of new opportunities. Ruth was his energy source and he was forever weakened by her death. She said the only disease he would ever die of was optimism. His optimism was not fatal but rather a sustaining life force for nine decades. Special thanks are given for the wonderful care of Rebecca Mostoles, dedicated caregiver to her “Doc”, and to her colleagues, as well as to Dr. Jeff Dempster who provided wonderful palliative care. The staff of Parkland at the Gardens made his final decade one of happy conversations, thoughtful support, dignity and respect. Funeral services on Monday November 22 at 1 pm Atlantic will be private at Shaar Shalom Synagogue, but will be available via livestream at https://funeraweb.tv/en/diffusions/41066. In view of the pandemic, no shiva will be held. Donations in his memory can be made to the Richard Goldbloom Medical Bursary at www.dal.ca/giving , the IWK Foundation at www.iwkfoundation.org/donate or to the charity of your choice.
See more See Less

In Memory Of Dr. Richard Goldbloom