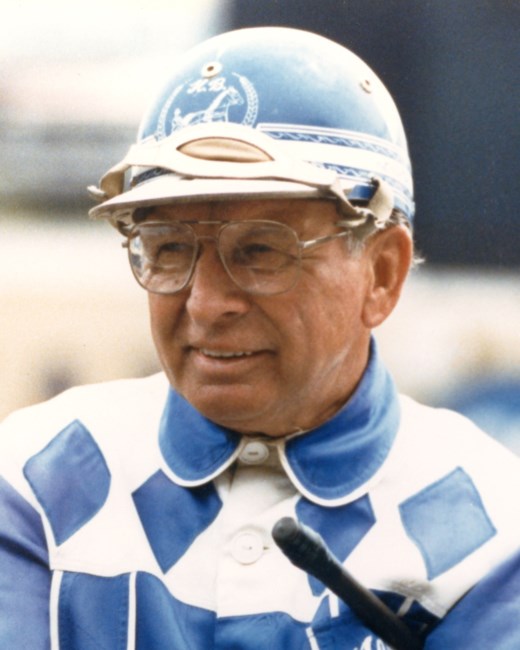 Harness Racing Legend Howard Beissinger Dies Howard F. Beissinger, 94, a member of the Harness Racing Hall of Fame for 44 years, died February 6, 2018 in Hamilton, Ohio. Born on May 16, 1923 on the family farm near Hamilton, Beissinger died only a few miles from where he’d been born. He won the Hambletonian, America’s greatest trotting classic, three times, earning the nickname “Hambo Howard.” He enjoyed international fame, and raced across the United States and Canada as well as at tracks in Russia, Germany, Sweden, Italy, and elsewhere. He was also a member of the Ohio Harness Racing Hall of Fame and the Butler County (Ohio) Sports Hall of Fame. He was known for his tough, no-nonsense approach to his profession. His unfailing attention to detail in matters such as proper shoeing won him the admiration of many of his fellow horsemen. He is best known as the trainer and driver of the great trotter and stallion Speedy Crown. Speedy Crown was foaled in early 1968 and raised on the Beissinger family farm in Hamilton. In 1971 Speedy Crown won the Hambletonian in straight heats and went on to a breeding career that would make him legendary in the world of trotting. Two years earlier, Beissinger had won his first Hambletonian with Lindy’s Pride, a colt that overcame faulty hooves with his speed and competitive spirit. Beissinger drove him to victory in the trotting Triple Crown---Yonkers Trot, Hambletonian, and Kentucky Futurity---in 1969. His third Hambletonian victory came in 1978 behind the meteoric Speedy Somolli, a son of Speedy Crown that Beissinger always said was the fastest trotter he’d ever driven. Beissinger learned the horse business from his father, who farmed and raced a few horses in the summer. After World War II, when Howard told his mother that he planned to make horse racing his profession, she greeted the news with tears. Her son achieved success quickly, however, becoming one of the leading drivers on the tough Chicago racing circuit. His abilities and his work ethic drew notice and he began to attract the support of prominent owners. In 1955, he married the former Ann Wingers. They were divorced in 1999. In the mid-1960s Beissinger earned the confidence and patronage of the Antonacci family of New York, a partnership that lasted for decades. For the Antonaccis and partners, Beissinger developed and raced countless stakes winners. Howard’s peers in the training fraternity admired his mastery of all aspects of horsemanship. For decades he campaigned a stable that competed with success in the sport’s largest stake races. In 1984, Beissinger entered four trotters in the Hambletonian, but decided to find other drivers for all four horses so that he didn’t show favoritism to certain owners. In 1987, he drove Defiant One to victory in the Breeders Crown in Toronto, Ontario at age 64, and he is still the oldest driver ever to win a prestigious Breeders Crown event. For a half-century, he was also involved in rodeo and traveled across North America to visit rodeos and connect with his cowboy friends. His daughter Vana was extremely successful as a barrel racer in rodeo. Beissinger produced rodeos throughout the Midwest in partnership with Don Hight, a South Dakota cowboy Howard greatly admired. Beissinger was well known in the rodeo world to the cowboys and cowgirls, as well as stock contractors and officials. In many ways, Beissinger personified the Cowboy Way: he was strong, independent, and resilient. He was up every day before dawn to start work, and his associates marveled at his energy and work ethic. Beissinger was fearless in pursuing his passion for adventure. When he became interested in rodeo, he took up steer wrestling, an event in which the cowboy jumps from a running horse onto the back of a running steer and wrestles it to the ground. This event is often called “bulldogging” and it’s most appealing to young men who feel invincible, but Beissinger began steer wrestling when he was in his 40s. He earned the nickname “Bulldog Beissinger.” On his 80th birthday, he went para-sailing off the coast of Florida. A decade later on his 90th birthday, he went hang-gliding at 3,000 feet near Lookout Mountain, Georgia. He is survived by daughter Jane Freeman (Dave) of Naples, FL; daughter Gloria Beissinger (Joseph Rickard) of Naples, FL; son Orrin (Minna) of Randolph, NJ; daughter Vana Beissinger; and two grandchildren Julia Ganzi and Markus Beissinger. A memorial service will be held at the Webb Noonan Kidd Funeral Home at 10:30am Saturday March 10, 2018 with a gathering for family and friends prior to services from 9am to 10:30am at the funeral home.
See more See Less

In Memory Of Howard F. Beissinger

Gathering for Family and Friends