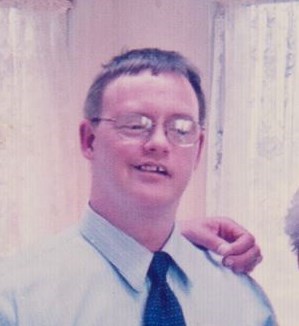 John Peery Edmonson, 55, of Harrisonburg, passed away on Friday morning, March 24, 2017 at Bridgewater Home. He was born on April 20, 1961 at Langley Air Force Base, VA and was the son of Frances A. Edmonson of Harrisonburg and the late William H. Edmonson, Jr. John attended schools in Warner Robins, GA, Macon, GA and Dayton, VA. He received a Certificate of Achievement from Massanutten Vocational Center in 1983. He worked at the ARC’s Op Shop from 1983-1984 and at Friendship Industries from 1984 – 2009. John participated in all Area 4 Special Olympics sports programs and in 1983 he represented Virginia in aquatics at the International Special Olympics Games at Louisiana State University, winning silver medals in 25 meter butterfly and 50 meter free style. In addition to his mother, he is survived by two brothers, William F. Edmonson of Middletown, Robert A. Edmonson and wife, Machelle, of Milpitas, California; three nieces and one nephew, Marcie G. Stern and her husband, Charles, of Stephens City, Kara E. Strosnider and her husband, Matthew, of Strasburg, Michael R. Edmonson of Milpitas, California, and Adrienne N. Edmonson of Des Moines, Iowa. The family will receive friends from 6:00 to 8:00 pm, on Friday, March 31, 2017 at Lindsey Funeral Home in Harrisonburg. A funeral service will be held at 11:00 am, on Saturday, April 1, 2017 at the chapel of the funeral home with Pastor John Lock officiating. Burial will be at Eastlawn Memorial Gardens. Memorial contributions may be made to Area 4 Special Olympics, P. O. Box 402, Harrisonburg, VA 22803 or Bridgewater HealthCare Foundation, Inc., 302 N. 2nd St., Bridgewater, VA 22812 or online at www.brcliving.org. Condolences may be sent to the family by visiting www.lindseyharrisonburg.com.

In Memory Of John Peery Edmonson