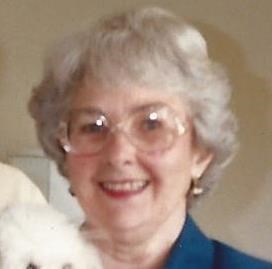 Norma “Nannie” McCoy Babb, 95, of Winchester passed away on Tuesday, February 21, 2017. She was born on January 18, 1922 in Waynesboro, and was the daughter of the late Robert S. and Annie Elizabeth Wright McCoy.

Norma was a supervisor for AT & T Telephone Company before retiring in 1981. She enjoyed traveling and visited many countries with the Shillelaghs Travel Club, dancing, needlepoint and collecting. She was a member of the Market Street Methodist Church. She enjoyed life to the very fullest until she became ill.

She is survived by a god daughter, Debra Hess Bower and husband, Randall; a god son, David A. Hess and wife, Darlene K. all of Winchester; several children who thought of her as Nannie, Ian and Trevor Weir, Shannon Kellas and Davey Hess; a best friend and like a sister forever, Betty Keiter Hess; and a very special little girl, Hannah-Bell Elizabeth Pugh, who came into her life at the same time Neill passed away and filled a special place in her heart. A graveside service will be held 11:00 am, Thursday, March 9, 2017 at Mt. Hebron Cemetery in Winchester, with Pastor Keiko Foster officiating.

In lieu of flowers, memorial contributions may be made to the Market Street Methodist Church, 131 S. Cameron St., Winchester, VA 22601.

Lindsey Funeral Home in Harrisonburg is handling arrangements and condolences may be sent by visiting www.lindseyharrisonburg.com

In Memory Of Norma McCoy Babb