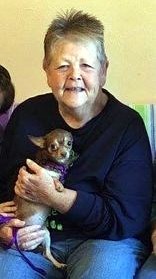 Sharon K. Bales, 76 of Benton, LA passed away in her home on January 23rd. She was born in Kansas City, MO on February 27, 1946. Sharon graduated from Lee’s Summit Senior High School in 1964 and went on to attend CMSU in Columbia, MO. She married William Boone, her daughter’s father who was in the Air Force, and traveled many places including one of her favorites Alaska. When she came back home she worked for Commerce Bank in Kansas City, MO as a Loan Officer for 20+ years and married Owen Bales in 1987. Sharon retired from the bank and moved to Truman Lake in Warsaw, MO where she opened a gift shop called This Old House in a house that was over 100 years old that she restored with friends. Sharon moved to Benton, LA in 2011 to be close to her daughter, granddaughter and her son-in-law. Sharon was an avid Chiefs fan and loved fishing, camping and found another passion in Dutch Oven cooking. She had a contagious smile and laugh and made friends everywhere she went. Sharon is survived by her daughter, Melaney Verran and her husband David; granddaughter, Madison and her boyfriend Kaleb Palmer; step granddaughters, Codie McJunkin and husband Jacob of Ashville, NC and Cheyane Verran and fiancé Chase Attebery of Brashear, MO. Sharon also leaves behind her beloved Evie, a tiny Chihuahua she adopted from Ninna’s Road to Rescue of Benton. The family requests in lieu of flowers that donations be made in her name to Ninna’s Road to Rescue, PO Box 1357, Benton, LA 71006-1357.
See more See Less

In Memory Of Sharon K Bales