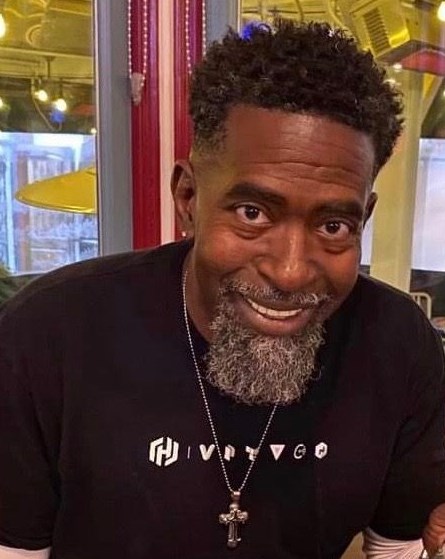 Brian was born to Fletcher and Claudette Franklin in Cincinnati, Ohio on December 5, 1965 and entered his heavenly home to be with his Lord and Savior on Tuesday, May 10, 2022. As a child to say he was mischievous would be an understatement. The saying was always '”Brian did it”. As a child his love for children was evident, while in the stroller if he saw a toddler he would say “Baby Momma”. Upon graduating from North College Hill High he joined the Army and served in the Persian Gulf War. Once he completed his service to his country, he made his home in Monterey, California and worked in various industries. He taught at a preschool shortly before transitioning to the Youth Sports Coordinator at the Monterey Bay Rec Center. All while coaching part time for CSUMB's women's basketball team. After a few years; he moved to Las Vegas to be with his children, where he immediately began working for Boys Town. Boys Town lead him to the most important job in his life, becoming a full live-in house parent at St. Jude's Ranch for Children. During his 16 years at St. Jude's, not only did he mentor kids but made more friends than anyone could count. His mother says “Brian is the only person she knows that has a job he truly loves.” His mentoring and fostering kids who needed attention, guidance and most importantly LOVE, made him truly happy. His legacy and memory will live on not only in the numerous kids who had the opportunity to live in “Mr. Brian's House” but the many friends he has made along this life's journey. His legacy and memory will live on forever. He will be missed. Brian leaves to cherish his memory, his children Gabriel D. Franklin (Salt Lake City, Utah), Briana M. Franklin (North Las Vegas, NV), mother and dad Claudette and Edward Spencer, Jr. (New Orleans, LA), grandchildren Gianni and Skylar, siblings Carolyn Love (Cincinnati, OH), Ronald E. Cosby (New Orleans, LA), Shuana M. Franklin (Houston, TX), and a host of nieces, nephews, family and friends. He was preceded in death by his father Fletcher Franklin, paternal and maternal grandparents and numerous uncles, aunts and cousins. Service and Celebration of Life will be held on Friday May 20, 2022 at 2:30PM at St. Jude's Ranch for Children 100 St. Judes Dr, Boulder City, NV 89005. Please join by Zoom Meeting #87147659969 Passcode: 285376 In lieu of flowers, the family request that donations in Memory of Brian be made to St. Jude's Ranch for Children, Boulder City, Nevada www.stjudesranch.org
See more See Less

In Memory Of Brian Lamar Franklin