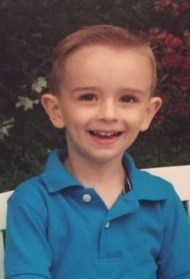 Our precious Jake was diagnosed with juvenile myelomonocytic leukemia, a rare childhood cancer at the age of 3 years and 11 months, on April 22, 2015. His adorable laugh, infectious smile at times could be somewhat deceiving given the amount of spunk and feistiness he was full of which gave him the upper hand for so long against an unrelenting cancer. Jake’s heroic courage never ceased during his 19 month battle. Jake was known for his love of others and the unbreakable bond he shared with his mommy. He loved playing baseball, hitting almost every pitch thrown to him even though his body grew tired after a little while. Jake enjoyed playing with dinosaur toys, Superheros (Batman, Superman and Spiderman) shark figures (especially the Jaws shark), watching the Jaws movie, Sponge Bob, Annoying Orange and Lego videos. Jake absolutely loved Legos. He enjoyed getting new sets to put together with his daddy. Jake loved NASCAR very much, with the #43 car being his favorite. Richard Petty is “The King” he always said; but nothing topped his Ipad.

His amazing little spirit will be missed, along with his generous heart, sense of humor and loving smile. In addition to his parents, Jake is survived by his 9 year old sister, Josie Kate Leatherman; grandparents, Anna Leatherman of Newton, John and Christine Tensley of Connelly Springs; aunts and uncles, Tracy Silvers and Pete Rareigh of Conover, Sherry and Scott Hamlett of Conover, Danny Tensley and Peggy Smith of Bethlehem, and Paulette and Timmy Canipe of Maiden; cousins, Brandon and TJ Canipe, Ashiton Leatherman, Dustin and Lili Tensley and Ava, Ryland and Jake’s favorite “cousin brudder” Liam Hamlett.

Jake was preceded in death by his grandfather, Paul Leatherman and uncle, Charles Leatherman.

A Celebration of Life will be held at 12:00 p.m. on Wednesday, November 9, 2016 in the Chapel of Drum Funeral Home in Hickory with the Rev. Timothy Grindstaff officiating. Burial will follow in Woodlawn Memorial Gardens.

In Memory Of Jake Ryan Leatherman