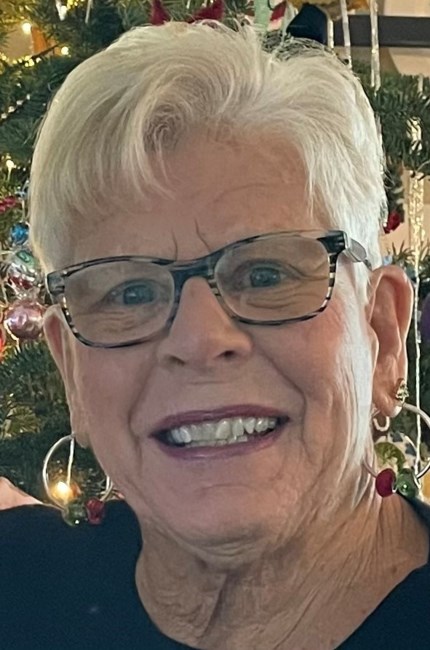 On Saturday, January 21, 2023 the Lord called Marjorie Gail Franks home to be with Him in heaven. Margie, one of the original Jersey girls, graduated from Trenton State College and went on to a 30+ year career as a physical education teacher at Matawan Regional High School, NJ. She was beloved by her students and that feeling of respect was mutual. She developed her classroom persona waitressing at the Surf and Sand Bar off the Manasquan Beach where her quips and one-liners made her a favorite of the evening revelers. And it was on the beach at Manasquan where she met and married the love of her life, Jay, her lifeguard for the next 46 years. In that span, Margie and Jay owned many homes from New Hampshire to Florida each of which benefited from one of Margie’s most ardent passions, decorating to a “T”, another of her many talents. Margie had a special relationship with her dogs, making each of them entertainers with the tricks she taught them to the delight of family and friends. In the summer, with Jay at the helm, Margie would hostess the pontoon party boat on Lake Winnipesaukee in New Hampshire docking at their Cow Island lake home where horseshoes, corn hole, and a barbeque awaited their guests. In the winter, it was snowmobiling and skiing, in the summer, jet skis and waterskiing with tennis when they came ashore. Margie was not about to let Jay get away without her. And it was swimming that was her forte, competing at the AAU level in her teens. One of Margie’s favorite activities was leading the pack of small convertibles, she in her Miata. A string of 8 to 10 two seaters would weave their way through the White Mountains of New Hampshire ending at Polly’s Pancakes for breakfast. On other occasions, she was sheparding couples to an early dinner at Poor Peoples Pub where she held court on meat loaf night. And it was Margie who convinced Beau, the owner, to downsize the $7 sundae dessert to a more manageable $1 size and a new menu item was borne. That was our little Margie. Margie is survived by her husband Jay; her sisters Barbara (Rick) and Ginny, sister-in-law Janna (Bill); and many cousins, nieces, and nephews. She is predeceased by her parents, Barbara and Harry Monsaert. The Wilder Funeral Home, Homosassa, FL, is in charge of arrangements. A celebration of life is planned for early summer in Tuftonboro, NH where she will be laid to rest. In lieu of flowers, donations can be made in memory of Margie to St. Jude's Children's Hospital, Shriner's Hospital or the Lakes Region Humane Society of Ossipee, NH, 11 Old Route 28, Ossipee, NH 03864
See more See Less

In Memory Of Marjorie Gail Franks