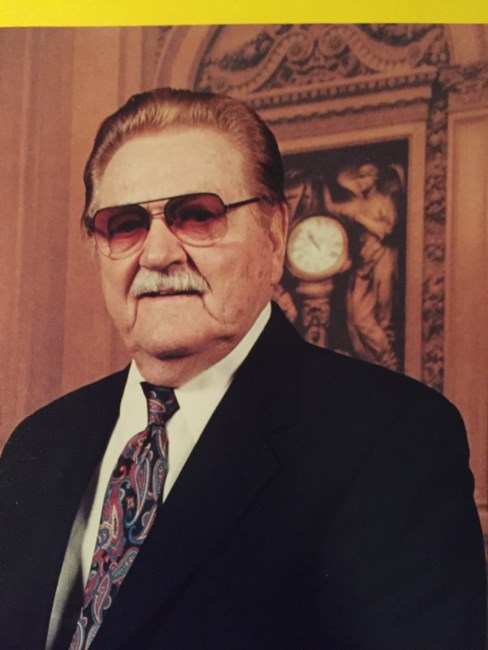 Leonard Joseph Okrie, 94 passed away Thursday, April 12, 2018. Len was born July 16, 1923 in Detroit, Michigan. He was preceded in death by his wife, Ileane Russell Okrie, his parents Frank and Marie Okrie, Brothers Frank R. Okrie Jr., Robert Okrie, and a sister, Dorothy Horn. He served in the United States Navy as a radioman first class during WWII. Len was a professional baseball catcher with the Washington Senators, Boston Red Sox and Detroit Tigers. During off season, he was employed at Howard Whitaker Mens store in Eutaw Shopping Center. He was a minor league manager for Detroit Tigers and retired in 1973. After retirement from the Tigers in 1973, his life took another turn, this time toward a career in law enforcement. Len was employed by the Cumberland County Sheriffs Department. He retired as a desk Sgt from the Sheriff’s Department in 1986. Len and his family enjoyed traveling and lived several years at the coast and continued to work part time as security guard. Moving back to Fayetteville, he was employed by Walmart as a greeter and became known as “Lennie” to employees and customers. He thoroughly enjoyed working with the public. Mr. Okrie retired for the third time in his eighties. Looking back on his life he acknowledged he was truly blessed; his dream of playing in major league baseball, his admiration for law enforcement and interacting with customers at Walmart. He continued to receive letters and requests for autographs from baseball fans and was always amazed and humbled that people remembered him. He often reflected that he had accomplished everything he wanted to do with his life and thoroughly enjoyed it all. Mr. Okrie was a member of Good Shepherd Catholic Church in Hope Mills, NC. He is survived by his sons, Joey, Len Jr., Robert; daughters Judy, Peggy, Deborah, Lucinda. Numerous grandchildren and great grandchildren, nieces and nephews. Visitation will be held from 11am to 12pm on Tuesday April 17,2018 at Good Shepherd Catholic Church. Funeral Mass will be conducted at noon by Father Gaul. Entombment will take place at Lafayette Memorial Park on Ramsey Street.
See more See Less

In Memory Of Leonard Joseph Okrie