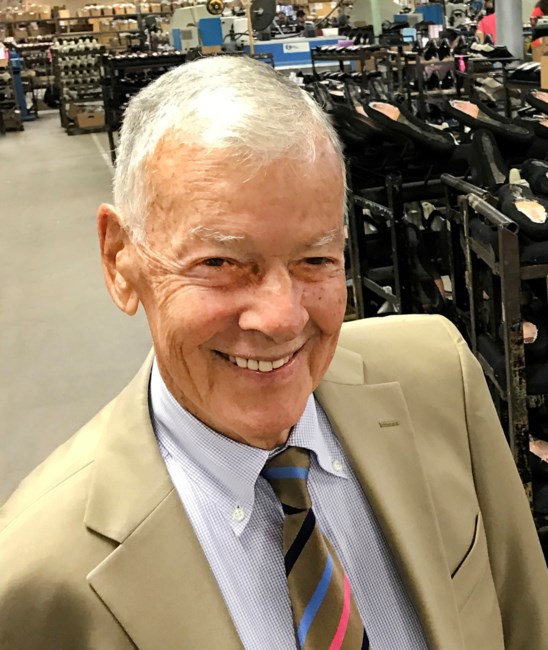 Robert Malcolm Munro, better known to all of us who loved him as Don, spent 94 years loving and caring for his family, friends, employees, acquaintances, and fellow man. His loss will be felt for far longer than that. Born in Newton, Massachusetts, Don graduated from Yale, and proudly served in the Army, where he was editor of the Stars and Stripes newspaper. He moved to Hot Springs with his wife Barbara and their four children (the fifth came along in 1963) in 1959, establishing a shoe manufacturing facility that in 1975, became Munro & Company, Inc. In its prime, Munro was one of the largest privately held shoe manufacturers in the US. He embraced his adopted home town of Hot Springs and spent the rest of his life making it, and Arkansas, a better place. His business accomplishments were many, and garnered the respect of his peers, as evidenced by his election as President of the American Apparel and Footwear Association in 2003, his induction into the Footwear Hall of Fame in 2004, and induction into the Arkansas Business Hall of Fame in 2005. But it was his philanthropic endeavors for which he will be most remembered. In 1985 he was awarded the T. Kenyon Holly Award, the highest philanthropic honor in the shoe industry. In 1992 he became the first recipient of the Pew Foundation’s American Philanthropy Award. Also in 1992 (a busy year!) he was awarded the Roots and Wings Award and the Lugean Chilcote Award from the Arkansas Community Foundation, which he led as President for ten years. Just a few of the organizations that benefitted from Don’s tireless efforts were the Garland County Community College, the Arkansas Math and Science School, the University of Arkansas System, the Arkansas Council on Economic Education, the Arkansas Arts Center, the Foundation for the Mid-South, the Arkansas Nature Conservancy, Garvan Botanical Gardens, Arkansas Community Foundation, Walton Family Foundation, Pew Foundation, Southern Development Bancorp and the University of Arkansas Medical Sciences Psychiatry Department. On April 14, 2021, he received a star on the Arkansas Walk of Fame in Hot Springs, which was officially declared “Don Munro Day” by Hot Springs Mayor, Pat McCabe. The many people mourning his loss are his wife Barbara, daughter Lindy, son Bruce and his wife Mary Beth and their children Nikki, Hannah, Braden, son Neil and his wife Martha Jane Murray-Munro and their children Sarah and Evan, daughter Mollie and her husband Tod Swiecichowski, daughter Christine and her husband Robert Jackson, and over 100 relatives in his extended family. We can never fill the hole in our hearts left by the loss of someone as beloved as Don, but we can heal our hearts by making them bigger with our love for others. Visitation is at Gross Funeral Home, Sunday, May 1 from 3-5 pm, 120 Wrights Street, Hot Springs. The Memorial Service will be held at Garvan Gardens, Tuesday, May 3, at 11:00 am, 550 Arkridge Road, Hot Springs. In lieu of flowers, the family would appreciate a donation to a charity meaningful to the benefactor – what better way to honor Don’s memory. Feel free to join the service virtually by clicking on the zoom link provided below: https://us06web.zoom.us/j/87220892700?pwd=eDJneUJ3S1hlNEluTmtXSWU3UVc3QT09
See more See Less

In Memory Of Donald Munro