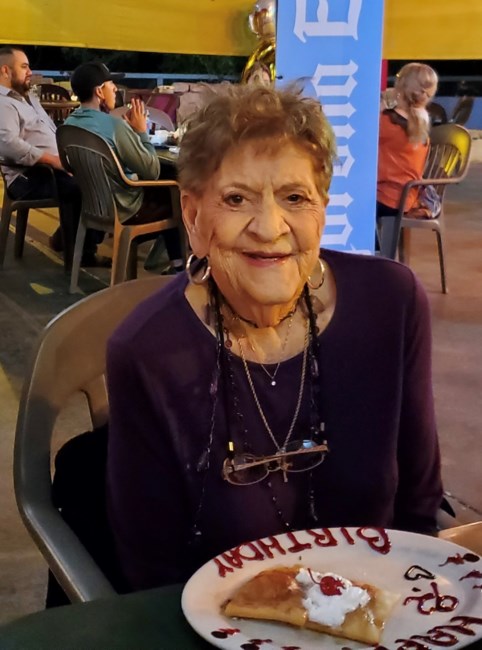 Audrey Dean Cowles, 93, passed away on September 20, 2022 in Houston, Texas. She was surrounded by her family and longtime family friend, Shelia Bernhard. Audrey was born in Shamrock Texas, the daughter of Seabury and Thelma McIntyre. She met the love of her life, Lt. William Robert Cowles, in Wichita Falls Texas. They later moved to Burkburnett, Texas where they raised their family of four children, Jimmy, Terry, Debi, and Traci. Once their children were grown, Audrey’s employer Ciba-Geigy Corporation, transferred her and Bill to Houston, Texas. She later retired from Ciba, but after a couple of years of retirement, she found that she wasn’t quite ready to stop working. She then went to work for Sears, then later, Foley’s, and finally ended her many careers with Milestone Mortgage in 2007. Audrey was preceded in death by her husband William (Bill) Robert Cowles, her daughter Traci Frey; and brother S.B. McIntyre. She is survived by her cousin Johnny McIntyre, her children Jimmy Cowles, Terry George, Debi Reese and spouse, Brian Reese, and her grandchildren Shaylay Harrington, Jessica Puckett, Kristian Reese, Joshua Reese and spouse Alina Reese, great grandchildren Korbin Pilant and Matthew Reese. She was an extraordinary example of how to manage work and family. She was a devoted Christian and was loved by all that she met along the way. Audrey would want to recognize her late brother in law, Jim E. Cowles of Dallas, Texas who through his love and support always stood by his brother’s family. She would also want to recognize Shelia Bernhard for always being by her side and supporting her family. A visitation for Audrey will be held Tuesday, September 27, 2022 from 1:00 PM to 2:00 PM at Chapel of Eternal Peace at Forest Park, 2454 S Dairy Ashford, Houston, TX 77077. A graveside service will occur Tuesday, September 27, 2022 from 3:00 PM to 3:15 PM at Forest Park Westheimer Cemetery, 12800 Westheimer Road, Houston, TX 77077. A celebration of life will occur Tuesday, September 27, 2022 from 2:00 PM to 3:00 PM, 2454 S Dairy Ashford, Houston, TX 77077. Fond memories and expressions of sympathy may be shared at www.chapelofeternalpeace.com for the Cowles family.
See more See Less

In Memory Of Audrey Dean Cowles