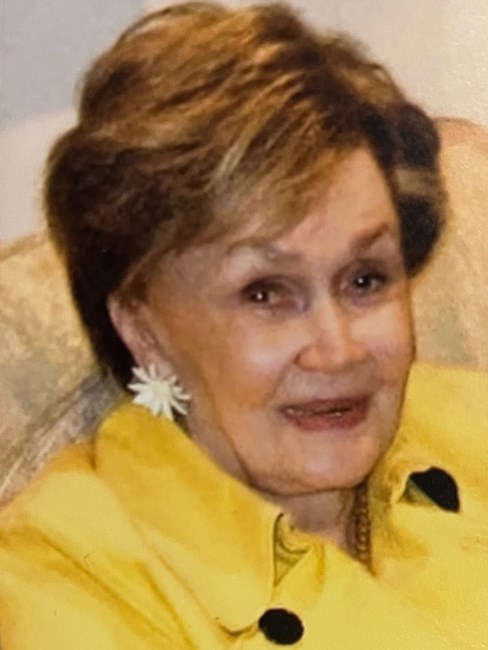 Betty Ann Bernell died peacefully at her own home on Monday, the 23rd of January 2023, at the age of 99 ½. She was born on the 19th of July 1923, in Memphis, Tennessee, to Hilda Kahn and Laurence B. Lowenstein and after her older sister, Mary Jane. The family moved to Houston when Betty Ann was about eight years old. She attended Poe Elementary School, Lanier Junior High and The Hockaday School in Dallas. Betty Ann attended Skidmore College in upstate New York. Rumor has it that she attended Skidmore because her mother wanted to see the horse races at Saratoga Springs. She met the love of her life, Louis Bernell, during WWII while he was on a Navy tour in Galveston. Louis would often lovingly refer to her as “Betsy.” They were married in November of 1945 at her family’s home residence at the Warwick Hotel. A special treat was that the wedding dress was designed by her great-uncle Henri Bendel of Lafayette, Louisiana and New York City. From the outset, her marriage and her life were filled with wonderful adventures. When Louis was not hard at work, they were busy travelling across the globe. Her home is filled with art and unique pieces from around the world and around the country. Their countless exploits were shared with their family, especially children Larry, Ron and Lisa. In the days before a constant barrage of options, Betsy and Louis’s strong circle of friends knew how to make their own fun, spending countless hours in Galveston and hosting each other for social occasions. She was always impeccably dressed with an innate sense of style. She lived her life to the fullest. Betsy and Louis were lifetime supporters of the Arts and were longtime supporters of the Houston Symphony, with season tickets for many decades. Betsy had a keen mind and was engaged in the growing sophistication of Houston. Betsy was an active member of the League of Women Voters over many years. She voted in every election, including the most recent one, in person. Betsy was a stickler for proper grammar, known to correct the pronoun usage of many of her children’s friends. She was a great lover of word puzzles and English literature as well as being a voracious reader; albeit later with the help of a Kindle with large print. Even recently, she would devour a book of several hundred pages in a matter of days and enjoy a lively discussion of content. Above all else, Betsy’s greatest joy was her family. She was preceded in death by parents, Hilda and Laurence Lowenstein; Louis, her devoted husband of 63 years; sister, Mary Jane and brother-in-law, Julian Frachtman; beloved first cousins, Barbara and Meyer Wagner and Jeanne and Sig Wagner. She is survived her loving children, Laurence Bernell, Ron Bernell and wife, Carolyn, and Lisa Rostad and her adored cousin, Susan Gillette Wagner of Dallas. Additionally, she is survived by beloved nephews, Richard and Anne Frachtman, Bob and Sherrie Frachtman, and Michael and Norma Frachtman, and their children. She treasured all her grandchildren, Andrew, Ben, Michael and Philip Bernell, Brent and Kaitlin Bernell, Kathryn Bernell and Marcus and Laura Rostad. We would like to commend the loyal devotion of her caregivers Amie Mbogba, Elaine Davis and Rosetta Shepherd. A funeral service is to be conducted at three o’clock in the afternoon on Thursday, the 26th of January, at the Proler Chapel at Congregation Beth Israel Memorial Park, 1101 Antoine Road in Houston where interment will immediately follow. In lieu of customary remembrances, memorial contributions may be directed to the Houston Area Parkinson's Foundation or to the charity of one’s choice.
See more See Less

In Memory Of Betty Ann Bernell