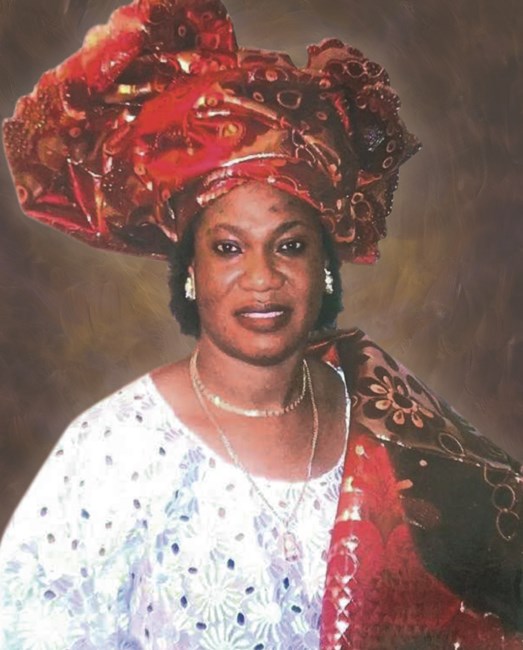 Caroline Nike Taye Ademoji (née Adewole), 63, graduated to heaven on Monday, January 16, 2023. All of her children were by her side at the time of death. Caroline was born on February 6, 1959 to Morenike and late Julius Omalokun Adewole in Ondo, Nigeria. She was the first born out of 6 to her parents along with her late identical twin sister, Kehinde, followed by 15 other siblings. Her grandmother played a prominent role in raising her as well. As a child Caroline was very easy going, quiet, and at the top of her class. She also was the only sibling to never receive any punishment from her father.  Caroline started her education at St. Matthew Primary School in Ibadan, Nigeria. She then continued her education at St. Louis Secondary School where she was at the top of her class. Caroline found her passion in nursing as a child. She watched the nurses in the uniform and always clinged onto them. This interaction helped her with the school and career path she wanted to follow. Caroline then attended Maria Assumpta Nursing and Midwifery School in Ado Ekiti, Nigeria where she learned the skills she needed for her practice. She then finished her schooling in Nigeria at University College Hospital (UCH) Ibadan class of 79’. During her education Caroline also ran track from secondary school up until nursing school.  Caroline met her husband in 1983 where they had a traditional wedding and decided to move to America in 1987. God blessed them with three beautiful Children: Segun (1989), Moji (1991), and Precious (1993). In 1994 she had an American wedding surrounded by love, family, and friends. Caroline was prominent in the church and ministry. She loved to plant good seeds in the church and truly lived a life of service. Caroline was involved in many ministries throughout her life and last was a dedicated member at Winner’s Chapel International Houston (WCIH) from 2008 to 2023 for 15 full years. She obtained her certificate in ministry and leadership training in 2012 at World of Faith Bible Institute through WCIH. She served as secretary of the decoration unit, prayer warrior of Gilead Squad, leader of house cell fellowship: Rehoboth, member of WCIH Senior Citizens and WCIH Kingdom advancement prayer squad. Both inside and outside of the church she lived her life serving others and winning souls for the kingdom.  Caroline valued her life as a Labor and Delivery Registered Nurse. She worked in multiple hospitals around Houston. Ben Taub Hospital, West Houston Hospital, Oak Bend Hospital, and the settled at Memorial Hermann Hospital for the last 15 years of her career. Caroline was working as a nurse for about 30 years when she decided to obtain her Bachelors of Science in Nursing at Grand Canyon University in 2014. Caroline was a hardworking and careful nurse. She was admired and was often sought out to help her colleagues and patients in any way possible. God blessed Caroline with hands that provided miracles and it became a standard practice to ask for Caroline to help a difficult laboring patient. She dedicated a total of over 40 years to her craft of Nursing.  Caroline’s favorite pastimes included: Praying, reading her bible, bible study, family time, laughing, singing, dancing, rejoicing, taking long walks and enjoying the fresh air with her children, finding joy and hope in every situation, socializing with friends and coworkers who she recognized as her family. She also helped sponsor children in Nigeria to complete their schooling by her donations.  She is survived by her three children, Segun Ademoji, Moji Ademoji, Precious Tezeyombi, Son-in-Law Idee Tezeyombi, and grandson Isaiah Ademoji.
See more See Less

In Memory Of Caroline Taye Ademoji