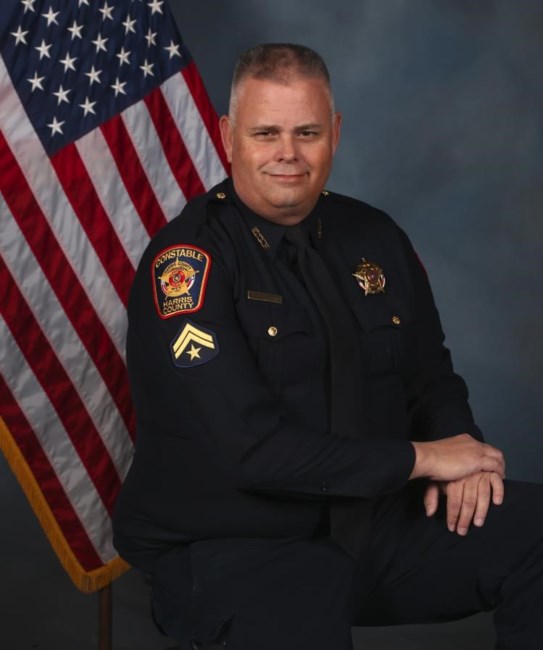 Harris County Precinct 5 Deputy Constable, Corporal Charles Eudell Galloway, Jr died in the line of duty on Sunday, January 23rd, 2022. He was 47. Charles was born April 27, 1974 in Harrisonville, MO to Charles and Verna Galloway. Charles was a long time resident of Katy, Texas and graduated from Snyder High School in 1993. He served with the Harris County Precinct 5 Constable’s Office for over 12 years. Charles held a bachelor’s degree in Information Technology and enjoyed traveling, coin collecting, watching baseball and serving and protecting his community. Mr. Charles Galloway was preceded in death by his parents Charles and Verna Galloway and sister, Elma (Cookie) Smith. He leaves behind his daughter, Sydney Carter of Katy, TX and two sisters, Sharon Florian of Katy, TX and Jeannie Henry of Gilson, Illinois and a host of other nieces, nephews, family and friends. Charles was an honorable Deputy Constable, Father and friend, and he will be greatly missed by all who knew him. The Galloway family would like to give a special thanks to all of the agencies involved in solving the murder of Charles Galloway. A funeral service will be held at 10:00 AM Tuesday February 1, 2022 at Second Baptist Church – West Campus 19449 Katy Fwy, Houston, TX 77094 and will be open to the public. In Lieu of Flowers, the family requests that donations be made on behalf of Charles Galloway to: The Blue Bow Foundation https://www.bluebow.org/donate.html#/
See more See Less