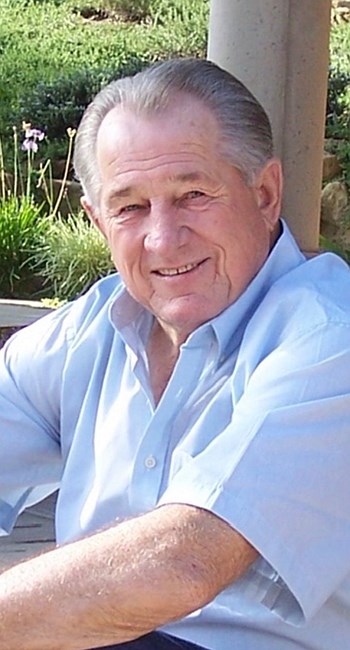 Donald E. Allgood was reunited in heaven with his beloved wife of 53 years Janice, as he was surrounded by his family on January 18, 2022. Donald was born in Houston, Texas on April 23,1942 to Minnie Bell and Robert Edwin Allgood. Donald shared a beautiful marriage with Janice and raised a loving family. His family, friends and faith were the cornerstones of his life. He lived with the utmost honesty and integrity. Donald’s laughter and smile would light up a room and his kind and gentle heart touched many. Donald was preceded in death by his parents Minnie Bell and Robert, brothers, Bobby and Jerald and nephew, David Rocchi. Those left to cherish his memory are his sister and brother-in-law, Shirley and AM (Kelley) Rocchi, brother and sister-in-law, Gary and Verla Allgood; daughters and sons-in-law, Donna and Michael Clopton, Vicki and Andy Sreden; grandchildren, Brittney and JD Brooks, Ryan and LaLa Clopton, Kylie Sreden, Austin Sreden, Regan Clopton, Ellie Clopton, Cameron Clopton; great grandchildren, Finley Brooks, Ty Clopton and Lydia Brooks, and many nieces and nephews The family would like to extend a special thank you to Auberge Vintage Lake staff and caregivers for their care and support and to Bristol Hospice for their extraordinary love and care in his final days. So grateful for the special gift of the most incredible man and for the blessed assurance that we will be reunited with him in heaven. A visitation for Donald will be held Wednesday, January 26, 2022 from 12:30 PM to 2:30 PM at Brookside Funeral Home, 13747 Eastex Freeway, Houston, TX 77039. A funeral service will occur Wednesday, January 26, 2022 from 2:30 PM to 3:30 PM, 13747 Eastex Freeway, Houston, TX 77039. A committal service will occur Wednesday, January 26, 2022 from 3:30 PM to 4:30 PM, 13747 Eastex Freeway, Houston, TX 77039. Fond memories and expressions of sympathy may be shared at www.brooksidefuneralhomelauder.com for the Allgood family.
See more See Less

In Memory Of Donald E. Allgood