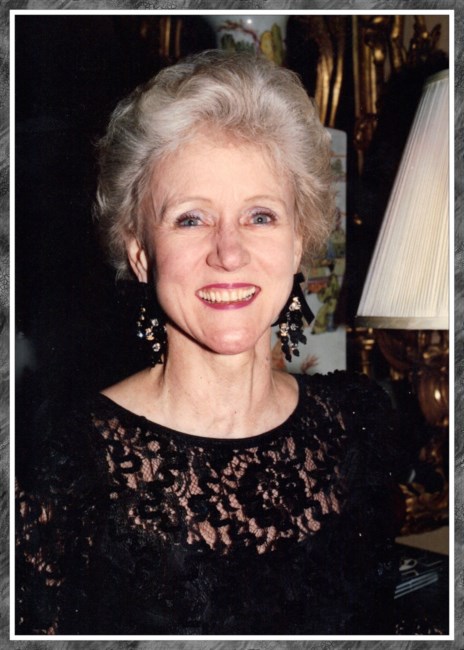 Betty Lou Carter passed away in her sleep on Saturday, the 5th of November 2011. A native Houstonian, Betty Lou was born on the 2nd of June 1928 to Anne Thomson Langston Staley and Ernest Langston. She attended River Oaks Elementary, The Kinkaid School, St. Mary’s Hall in San Antonio and The University of Texas. As a Kappa Kappa Gamma, her glory stories included playing Powder Puff safety and cruising the “40 Acres” in her1933 Henney Hearse. A perfect match to her lively spirit, Betty Lou married James L. Bayless, Sr. on the 15th of December 1950. The two cut a wide and generous swath across the Houston community through their civic involvement. Betty Lou served as President of the Junior League, 1967-68 (Charity Ball Chairman, 1958); member of the Red Cross Board of Directors and Chairman of Volunteers; President of Friends of the Texas Medical Center Library where she was honored for her service; and Director of the Institute of Religion and Family Service Center. She also served as past President of Assembly and was a member of the Bayou Club, Houston Country Club and the Garden Club of Houston. Devoted to women’s health, Betty Lou was staunchly dedicated to Planned Parenthood of Houston, serving on the Board of Directors between 1980 and 1996. Her efforts were duly recognized with her installation into the Margaret Sanger Circle, the organizations highest honor, and later honored in 2002. Beyond her immersion in the non-profit world, Betty Lou will be forever remembered for her enthusiasm for the arts and passion for the world of dance. A dancer herself, Betty Lou focused decades of energy on Houston Ballet, serving as Board Trustee of the Foundation and Founding President of the Houston Ballet Guild. Following the sudden death of her husband, Jim, in 1982, Betty Lou married John B. Carter, Jr. in 1987, a man of equal parts, vision, humor and dedication to Houston. The two spent 18 years together before Jack’s untimely death, dividing time between Jack’s High Prairie Ranch and Betty Lou’s beloved Hill Country home, Cuwhiffle, As formidable as she was petite, Betty Lou had the courage of a lioness, and lived to dance, laugh and make a difference. She is survived by her son, James L. Bayless, Jr. and wife, Liz, of Austin, Texas; daughter, Louise Bayless Parsley, son-in-law Robert S. Parsley of Houston; grandchildren, Elizabeth Langston Parsley, Robert Bayless Parsley and Garland Strake Parsley; her sister, Anne Langston Sargent of Scottsdale, Arizona; and two nephews and their families. The family wishes to express deep gratitude for Marie Gilford for her care and loyal service for 21 years. The memorial service is to be conducted at ten o’clock in the morning on Wednesday, the 9th of November, in the Sanctuary of First Presbyterian Church, 5300 Main Street in Houston, where Dr. Bill Heston, Executive Pastor, is to officiate. Prior to Wednesday’s service, the family will have gathered for a private graveside and interment service at Glenwood Cemetery in Houston. In lieu of customary remembrances, contributions in honor of Betty Lou may be directed to the Houston Ballet, 601 Preston St., Houston, TX, 77002; or to Planned Parenthood of Houston, 4600 Gulf Fwy., Houston, TX, 77023.
See more See Less