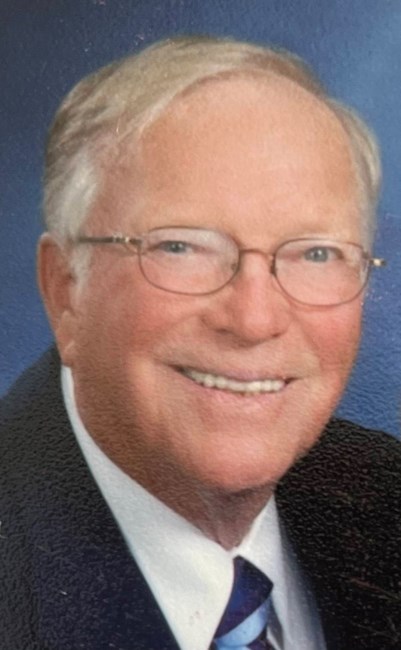 Eugene (Gene) Charles Fowler (1936-2022) Gene, known as Dziadzia to his family, was welcomed into heaven on May 5, 2022. His life of service to others, travels with his wife, and time spent with his close-knit family was the joy that fed his soul. He will be greatly missed and his absence deeply felt by the many who knew and loved him. Gene was born April 4, 1936, to Charles and Loretta (Killingbeck) Fowler in Michigan City, IN. He attended Elston High School in Michigan City and graduated from Indiana University with a BS in Accounting in 1958. Gene married Arleen Koziatek on September 13, 1958 in Michigan City, IN. He entered the Army as a 2nd Lieutenant in the Medical Services Corps and obtained the rank of Captain before his honorable discharge from the Army. He became a CPA and completed the Harvard University Corporate Finance Program. Gene concluded his education with an MBA from Northern Illinois University. Gene’s accounting career was spread over various industries, which included: manufacturing (Weil McLain), steel (Midwest Steel and Inland Steel), Agriculture (DeKalb Ag Research) and Oil & Gas industry (Pride Petroleum Services and Dawson Production Services). He was grateful that he could go to work every day doing something he loved with people he enjoyed working with. Gene was an active leader in many organizations. In Michigan City, he was a member of the Marquette Catholic High School Board, and at St. Stanislaus Parish he was on the financial council and one of its first lectors. In DeKalb, IL, he was a board member and President of the Kishwaukee Family YMCA. He was elected as Vice President of the Chicago Chapter of the Institute of Internal Auditors. In Houston, Gene served on the finance Council of St. Maximilian Catholic Parish. He was a 4th degree Knight in the Knights of Columbus and a charter member and treasurer of St. Michael the Archangel Council. As a member of the AESC (Association of Energy Services Companies) he was Treasurer, President, and member of the Board of Directors for several years. Gene was presented the prestigious “Golden Rod Wrench” award for his lifetime of achievements in the oil well services industry. He was also active in the AICPA, Financial Executive Institute and the IPAA. In retirement, he continued to be involved in the St. Michael Catholic Parish; serving as a lector, Eucharist minister and President of St. Michael Sociable Seniors. He was an avid golfer during his retirement. His golfing foursome met 2 to 3 times a week, even though he was the D player: it was his passion. Traveling could also be considered a second career for Gene. He and Arleen traveled to over 100 countries. Their travels started with self-designed itineraries, then progressed to group tours, then cruises, and then individual tour guides. The vacations with the entire Fowler family were a highlight for Gene. His most memorable and moving travel experience was receiving a personal blessing from Pope Francis. Favorite sites included the Taj Mahal in India and the Augusta National Golf course, with his favorite city being Barcelona, Spain. Gene was a devoted and loving father and Dziadzia. He never missed an opportunity to attend his children’s and grandchildren’s various events. He was their biggest cheerleader. Surviving are: Arleen, his friend, wife and true love of 63 years, his 5 children and their spouses: Camille (Kevin) Higdon, Tammy (Butch) Lamoreux, Barry (Meg) Fowler, Maureen (Mike) Frank, Suzanne (Stuart) Webb. His 11 grandchildren and their spouses: Kyle Higdon, Brian (Megan) Fowler, Wesley (Maddie) Higdon, Cody (Kristen) Portales, Margo Portales, Haley Portales, Holly (Andres) Osorio, Jordan Lamoreux, Casey Fowler, Alyssa Fowler, and Kennedy Webb. His 6 great-grandchildren: Cassidy Portales, Carter Portales, Owen Fowler, Camdyn Portales, Caden Portales and Alexandra Osorio. One sister Peggy (James) Ninmer of Las Vegas, NV. Services: Visitation will be held at 6pm, followed by saying of the Rosary for Gene at 7:00pm on Monday, May 16th at Earthman Funeral Directors, 8303 Katy Freeway, Houston, TX. Funeral Services will be held at 2pm on Tuesday, May 17th at St. Michael the Archangel Church, 1801 Sage Road, Houston, TX. A reception will follow at the church. Burial Service will be held at St. Stanislaus Cemetery Chapel, Michigan City, IN. In lieu of flowers, we request donations be made to Gene’s childhood church of St Stanislaus Parish in Michigan City, IN. https://www.sanctusstanislaus.com/ or St. Michael Parish in Houston, TX https://stmichaelchurch.net/online-giving
See more See Less

In Memory Of Eugene Charles Fowler