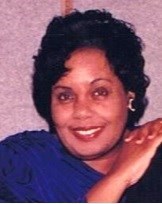 Mrs.Evelyn Dickerson Nunn was born in Brenham, Washington County, Texas on January 12, 1939. She was the sixth of twelve children born to Mr. Earlie and Mrs. Mary Dickerson. On Monday morning, January 17, 2022, Evelyn peacefully went home to be with our Lord. Evelyn accepted Christ at an early age and was baptized at the Rocky Chapel Baptist Church in Brenham, Texas. She and her siblings enjoyed sharing many fun stories about growing up in their large family. As teenagers they had a gospel singing group that was known throughout Washington County. Evelyn was one of the lead singers, her favorite song was “Tell the Angels I’m on My Way”. Evelyn joined Rising Star Missionary Baptist Church in 1979 under the leadership of the late Pastor C. B. Young. Evelyn served faithfully in the following ministries: choir, building fund, and mission. In 2012 she joined Heaven Bound Christian Worship Center under the leadership of Pastor C. A. Easley, where she was a faithful member until her health began to fail. Evelyn was educated in the Brenham Independent School District where she attended Pickard High School. January 31, 1959, Evelyn was joined together in holy matrimony with Mr. Floyd Nunn. To this Union, seven children were born: Debra Elaine, David Donell, Thomas Earl, Patricia Ann, Sharon Janice, Beverly Joyce and Floyd Kevin, Jr. Evelyn was a devoted wife and mother. She loved cooking and caring for her husband and children as well as helping others. Before Evelyn began working outside of her home, she would help her elderly neighbors by cooking meals, driving them to their doctor appointments and grocery shopping. Evelyn was a loving and giving woman, no one was a stranger to her. She also had a love for animals, she would pick up stray animals (dogs and cats) and bring them home to care for them. After her children were school age, Evelyn began working for the North Forest School District where she served for over 24 years as a custodian. After retiring from full time work, she became a substitute custodian for an additional three years. Evelyn is preceded in death by her parents Mr. and Mrs. Earlie Dickerson; two sisters, Earlie Mae Thomas and Lavorn Ragston; four brothers, Wilbur, Arthur Jessie a.k.a. (A.J.), Jessie and Arthur Dickerson; son-in-law, Curtis Gabriel. Evelyn leaves to cherish her memories, her husband of 62 years Floyd Nunn, Sr., her seven children; Debra Elaine Gabriel, David Donell Nunn, Thomas Earl Nunn (Patricia), Patricia Ann Johnson (Kenneth), Sharon Janice Richmond (James), Beverly Joyce Owens (Frederick, Sr.) and Floyd Kevin Nunn, Jr.; seventeen grandchildren, thirty-three great grandchildren, three great-great grandchildren; three sisters; Edna Ragston of Somerville, Texas; Darlene Robinson (Billy), Dallas, Texas; Lula Ray, Augusta, Georgia; three brothers, Rogers Dickerson (Joyce), Port Authur, Texas; Booker T. Dickerson, Houston, Texas; Jerry Dickerson, Hearne, Texas and a host of nieces, nephews, other relatives and friends. A visitation for Evelyn will be held Friday, January 28, 2022 from 6:00 PM to 8:00 PM at Paradise Funeral Home, 10401 West Montgomery, Houston, TX 77088. A visitation will occur Saturday, January 29, 2022 from 9:00 AM to 11:00 AM at Northside M.B.C., 6915 Curry Rd., Houston, TX 77093. A funeral service will occur Saturday, January 29, 2022 from 11:00 AM to 12:30 PM at Northside M.B.C., 6915 Curry Rd., Houston, TX 77093. A committal service will occur Saturday, January 29, 2022 from 1:00 PM to 1:15 PM at Paradise Cemetery North, 10401 West Montgomery, Houston, TX 77088.
See more See Less

In Memory Of Evelyn Dickerson Nunn