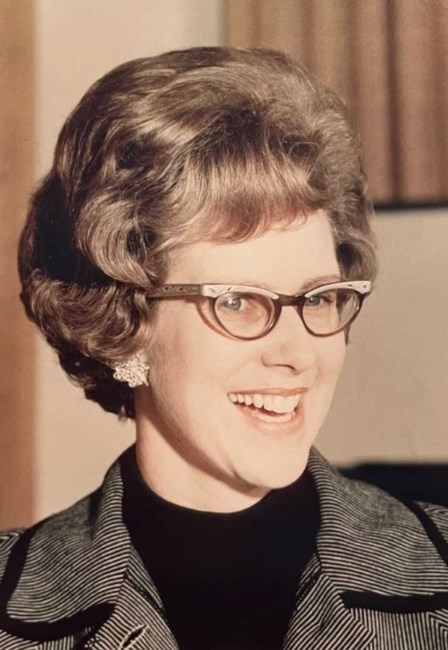 Georgia Fox Bowman, 88, of Houston, Texas, passed away on July 26, 2022, after a short courageous battle with colon cancer. She took on cancer with tenacity and dignity, the way she lived her life. She fought to the end, and she never lost that brilliant mind to the last breath! She passed away peacefully at home with her loved ones by her side. Georgia was born in Foreman, Arkansas on February 22, 1934, to Eulice Earl Fox and Zella Whisenhunt Fox. She was the youngest of five children. After beginning school, Georgia was a shining star amongst classmates and a trail blazer for the female students that came after her. She was the first female Student Body President and the first female Drum Major in the marching band. Everyone was in awe of her precision when she strutted down the street and twirled her baton, throwing it up in the air and catching it behind her back. Georgia graduated in 1953 as Valedictorian. She then attended Texarkana College and was involved in the Drama Department. After a year she went to Baton Rouge to visit family and was hired as a secretary at a Chevrolet dealership. During this time, she married her boyfriend, James Bowman. James, Georgia, and her two brothers then moved to Texas to work for Dow Chemical Company at the recommendation of a Foreman friend. After a year and a half of marriage she had her son, Jimmy. Three months after his birth she began her career at Dow. Georgia worked in the Invoice Accounting Department for thirty-seven years, retiring in 1992. While working there she was among the first women to make up the Dow Tour Guides, taking visitors around Dow and informing them about its products. She was also active in the National Secretaries Association (Brazoria County Chapter) where she was chosen Top Secretary of the year in 1964, served as Vice President and was a member of numerous committees. Georgia continued her love for drama by involving herself in the Little Theatre Group in the Community House in Freeport, as she cherished acting. She was also Team Mother for her son Jimmy’s baseball team. In 1968 Georgia gave birth to her daughter, Sherri, yet still managed to stay active in her career, hobbies and at church. After Georgia retired, she went to France to be with her daughter, Sherri Bowman, who was studying abroad. They enjoyed traveling together throughout France, Italy and Spain. Georgia loved to travel and loved to shop. Some of the ladies that she worked with retired at the same time as she. They would load up the car, and with Georgia at the wheel, they would travel throughout the country. Many times, they came home with packages under their feet and in their laps, just stuffed wherever they could find a spot! They loved it! But family was the most important thing to Georgia. She moved to Pearland and eventually Houston primarily to be closer to her grandchildren. Her happiest moments were spent with her children, grandchildren and great-grandchildren. She was married 66 years to Jamie before he passed away in November 2020. She was preceded in death by her siblings Joyce Fontenot, Floyce Haggard and Grady Fox. She is survived by her son James P. (Jimmy) Bowman Jr. (Carolyn) of Friendswood, Texas; daughter Sherri Sagarnaga of Houston, Texas; grandchildren, Carli Bolden (Brooks) and Nicole and Lauren Sagarnaga; great grandchildren, Ella, Mia, Josiah, Judah and Lola Bolden; brother E. E. (Earl) Fox Jr. of Brazoria, Texas, sister-in-law Bobbie Jean Bowman of Houston, Texas; and many nieces and nephews. A visitation for Georgia will be held Friday, August 12, 2022 from 11:30 AM to 12:30 PM at American Heritage Funeral Home, 10710 Veterans Memorial Drive, Houston, TX 77038. A funeral service will occur Friday, August 12, 2022 from 12:30 PM to 1:30 PM, 10710 Veterans Memorial Dr, Houston, Texas 77038. A committal service will occur Friday, August 12, 2022 from 2:00 PM to 2:30 PM at Houston National Cemetery, 10410 Veterans Memorial Drive, Houston, TX 77038. A reception will occur Friday, August 12, 2022 from 2:30 PM to 4:30 PM, 10710 Veterans Memorial Drive, Houston, TX 77038. Fond memories and expressions of sympathy may be shared at www.AmericanHeritageFuneralHome.com for the Bowman family.
See more See Less

In Memory Of Georgia Thelma Bowman