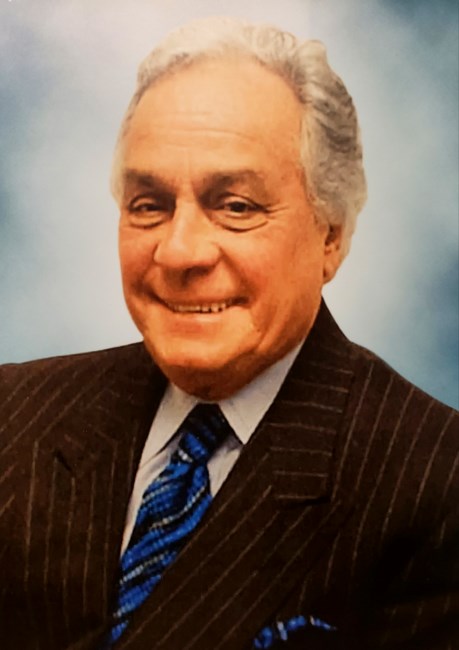 Harry Pontone, of Brooklyn, New York, and recently Houston, Texas, passed away peacefully on Tuesday, January 25th, at the age of 91 years old, surrounded by his family. Harry was born on April 27th, 1930, in Brooklyn, New York, to Angelina Pontone (nee Sarno) and Thomas Pontone. He was the firstborn son of eight children. Harry graduated from Stuyvesant High School and continued his education, earning his funeral director's license from American Academy McAllister Institute. In 1931, Harry's father started South Brooklyn Casket Company. Harry, along with his four brothers, eventually joined their father at the company, which expanded to include Miller Casket Company and Reliable Miller Casket Company, then combined under Milso Industries where Harry was President and CEO. Harry kept growing the business through his unique ability to form personal connections and friendships with his clientele. Lifelong friends and family, as well as colleagues in the funeral business, were drawn to Harry’s intelligence, charisma, love of life, and true concern for them. He cared for his profession and did much to support the associations and the colleges to advance the future of funeral service. On November 29th, 1966, Harry married Carolyn Sue “Carol” Hall at St. Patrick's Cathedral. This union would be blessed with two sons, Scott (1968) and Russell (1970). Harry is survived by the mother of his children, Dr. Carolyn Pontone; son Scott Pontone (Elisa Pontone); son Russell Pontone (Kumiko Suzuki-Pontone); endearing friend and "daughter" Josephine Pesce; grandchildren Ryan, Dale, Tate, Harry, Madeline, and Tiger; and longtime friend of Scott and Harry, Jody Pontone, mother to Ryan, Dale, Tate, and Harry. Harry is also survived by his sister Gloria Revano; brothers Thomas (Kathy), Andrew (Maryann), and Michael (Martha) Pontone; brother-in-law Vincent Apicella; sister-in-law Josephine Pontone; and nieces, nephews, and cousins. Harry was preceded by his brother Louis Pontone; sisters Josephine Apicella and Mary Manigilia; and his brothers-in-law Anthony Manigilia and Caesar Revano. Harry was a devoted son who spent every New Year's Eve with his mother while she was alive. This tradition was Harry's way of making sure his mother, "Angie,” knew how much he cared for and loved her. He was also a loving father who cherished time with his boys and their families, often including them in his travel adventures — his most favorite being Capri, Italy. Harry was a lifelong lover of the arts and supported them as a Patron of the New York Opera. He was devout to his Catholic faith, attending weekly Mass. He was a parishioner of The Church of St. Paul The Apostle for many years while residing in Manhattan. Harry's dapper style was iconic. He even dressed for bedtime, including putting on fresh cologne. When young Harry asked why, he answered in his true remarkable style, "Listen, you never know who you will meet in your dreams." Harry’s spirit will live in our hearts forever — may his memory be a blessing. A visitation for Harry will be held Monday, February 7, 2022 from 5:00 PM to 7:00 PM at Memorial Oaks Funeral Home. A rosary will occur Monday, February 7, 2022 at 7:00 PM. The funeral mass will commence on Tuesday, February 8, 2022 at 10:30 AM at St. John Vianney Catholic Church, 625 Nottingham Oaks Trail, Houston, Texas. The committal service will occur Tuesday, February 8, 2022 at 11:30 AM at Memorial Oaks Cemetery, 13001 Katy Fwy, Houston, Texas. All services will be live streamed. https://www.facebook.com/Harry-Pontone-109524824976189 Fond memories and expressions of sympathy may be shared at www.memorialoaksfunerals.com for the Pontone family.
See more See Less

In Memory Of Harry Pontone