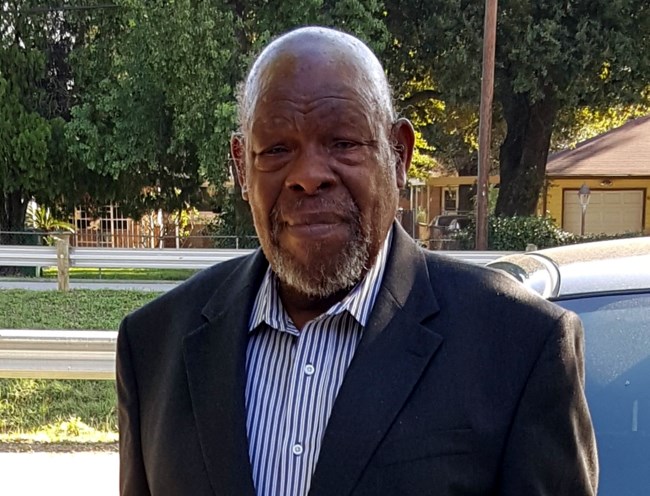 Hubert Moore was born December 14, 1937 in Riverside, Texas to the late Huggy and Minnie Moore. Minnie was affectionately known to all as “Gran-Mammy”. Hubert was the youngest baby boy of twelve siblings. During this time, the Moore’s were the pillars of their community. The Church of Christ had their weekly Sunday services in the Moore’s home. He loved God, and the love of God spilled over into his love for people. This foundation contributed to the independent, wise, and strong man of integrity Hubert would be throughout his life. Hubert and his siblings were raised on a farm in Riverside, Texas. In the 1950’s, the family moved to the city of Houston, Texas. During his teenage years, he helped care for his nieces and nephew. He was always surrounded by family. The family lived in the Sixth Ward, Fourth Ward, and Settegast areas. He attended Brock Elementary School, E.O. Smith Junior High, and Phyllis Wheatley High School. While attending school and after finishing school, Hubert developed a strong work ethic; He worked numerous odd jobs to support himself and his family. He was always devoted to providing for his family. He worked at Finger Furniture Store for several years, and then he was employed as a Custodian with Scarborough High School in the Houston Independent School District for 27 years. After retiring from the school district, he dedicated the remainder of his life to supporting his family and cooking in his barbeque business, which he most truly loved doing. Hubert, along with long-time friend, Mr. James Sparks, owned and operated a successful barbeque business. He regularly cooked and catered for churches, weddings, and school events. He and his wife Essie prepared for these events, as well as prepared and served barbeque to the local community from his home on Shotwell Street. Hubert was widely known as Uncle Mo by his family and by the local community. Uncle Mo’s door was always open to support anyone in a time of need. From a previous marriage, Hubert would become a father to daughter Patricia Ann Moore “Suki”, and son Herbert Moore “Junior”. On December 27, 1971, he married the love of his life, Essie Mae Scott. They were married for over 46 years. To this union, they would have a daughter Chevalier Elaine. She would be an addition to their family which included, Essie’s two sons, Michael and Garland. Hubert loved all his children. He was known as “Papa” and “GrandPa” by his grandchildren. Hubert is preceded in death by his wife Essie Mae Moore, his parents, Huggy & Minnie Moore, and including 4 sisters Goldie B. Massey, Jorean Gonzales, Jewel Pordras, and Grace Mackey. He leaves to cherish his precious memories: Children: Chevalier Moore-Samuel, Patricia “Suki” Moore, Herbert Moore, Michael Scott, and Garland Scott. Grandchildren: Jasmine Samuel, Johnnie Samuel III, Shontondria Moore, Bryan Wright, Jonathan Moore, John Moore, Randy Moore, Marlon Moore, Michael Moore, Tammesha Moore, Michael Scott Jr., Michael LeVan Scott, LaTonya Scott, Kesha Scott, Pamela Scott, Garland Scott Jr., and Terry Scott. He is also survived by a host of great grandchildren, cousins, nieces, a nephew, and dear friends A visitation and gathering for Hubert will be held Monday, January 31, 2022 from 10:00 AM to 11:00 AM at Paradise Funeral Home, 10401 West Montgomery, Houston, TX 77088. A celebration of life will occur Monday, January 31, 2022 from 11:00 AM to 12:00 PM, 10401 West Montgomery, Houston, TX 77088. A committal will occur Monday, January 31, 2022 from 12:30 PM to 1:00 PM at Paradise Cemetery North, 10401 West Montgomery, Houston, TX 77088.
See more See Less

In Memory Of Hubert Moore