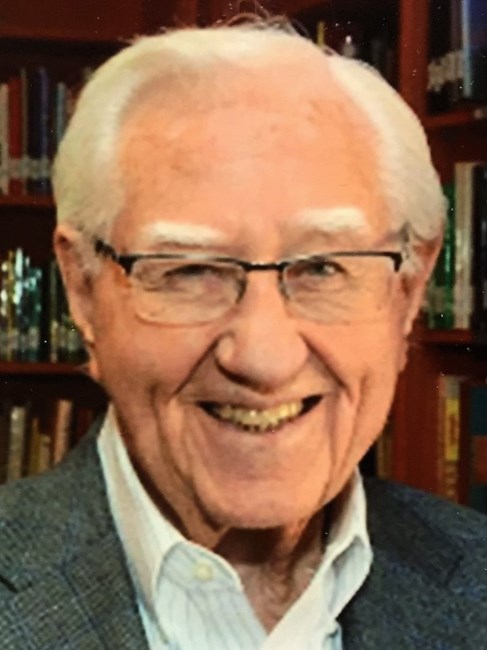 Jack Chambers Douglass peacefully passed into the welcoming arms of his eternal Father with his loving wife by his side at home on the morning of Tuesday, the 17th of March 2020. He was 88 years of age. Born in Decatur, Texas, on the 4th of November 1931, to Joseph Earl Douglass and Erma Lou Chambers Douglass, Jack was the youngest child of four, with two brothers and one sister. His family relocated to Gainesville, Texas where he grew up, played on the football team and graduated from Gainesville High School. During these years, Jack began working at an early age at various jobs, the local hardware store and gas station, and especially had fond memories of hardworking summers on his Aunt Ava’s farm with his cousins working the fields and livestock. Following graduation, Jack entered the Navy during the Korean conflict. In his fourth term, while serving on the aircraft carrier, the USS Bennington, he was severely injured and burned from a massive explosion on the vessel, resulting in many deaths on board, and his hospitalization for two months. Completing his service in the Navy, Jack pursued his education and graduated from North Texas State College (now University) in Denton. In 1959, he began his 36 year career with General Motors Corporation, Chevrolet Motor Division in the Dallas Zone. Transferred to Detroit in 1973, he spent 14 years in Michigan in Dealer Organization and Development, Central Office; Sales and Management, G.M. Corp., returning to Texas (Houston) and retiring as Zone Manager for Chevrolet Motor Division in New Orleans, Louisiana in 1995. During Jack’s years with General Motors, he was fortunate to work and spend time in many cities in the U.S. and world including, Asia, Europe and South America. Jack was a godly man, who exemplified integrity, gratitude, discipline and a great heart for compassion. Strongly influenced by his mother’s love for God, church and his Christian values were always important and guided him throughout his life. He loved his years as a Boy Scout troop leader, helping young scouts to achieve and was awarded the Order of the Arrow. A member of Kirk in the Hills Presbyterian Church in Bloomfield Hills, Michigan, and then First Presbyterian Church Houston, he was an active member of both the Fellowship and Boomers Classes. He was honored to have served on the Pastor Nominating Committee. Jack volunteered for many groups, including Meals on Wheels, trained and served as a Stephen Minister, worked with Community Bridges helping to repair and mend houses for those in need, was one of the founding and active administrators of the Shepherd Center of Main Street Ministries for 13 years, an FPC ministry reaching out to help and direct those trying to rebuild their lives, became a Lay Chaplain at Methodist Hospital for years of service, was on the Advisory Committee and Lay Chaplain for Prayers of the People, a hospital ministry to patients, and a volunteer for The WorkFaith Connection, a life changing program to equip discouraged men and women with skills and training for permanent employment. Jack had many interests and passions in life, among those: spending time with family, his love for nature and the Texas countryside, his vegetable garden, indoor fresh flower bouquets, dogs, dressing up especially in a tux, fine dining with friends at gourmet restaurants or just the local BBQ joint, reading, theater, his workbench and tools, golf, hunting, Bible study, keeping well shined cowboy boots, and his evening cocktail. Most of all, Jack loved his country, home and family. He was a loving father, blessed with three children, two grandchildren and was a devoted husband to the love of his life, Linda, for over 48 years. He had a special love for his in-laws, who because of the early death of his parents while in his twenties, became like parents to him in later life. Although Jack suffered with difficult back and health issues during much of his life, and many surgeries, he always met those challenges with a smile, dignity, great courage and positive determination, never complaining. He was a man of faith, a friend to everyone he met, kind, generous and a loving servant who will be greatly missed. Jack was preceded in death by his parents; an infant son; his brothers, Joseph Earl Douglass, Jr. and George Elbert Douglass. He is survived by his wife, Linda Stewart Douglass; his daughters, Sharlie Anne Hall (J. P. “Butch”), Marci Lynn Crouse (R. Scott); his son, Michael Stewart Douglass (Katherine Olsen); his granddaughter, Sara Katherine Douglass; his grandson, Matthew Stewart Douglass; his sister, Luann Douglass Walden (Roland); his nieces, Nancy Douglass Kersh (Ronald C.), Laura Ann Walden, Janet Walden Moore (Gillus W.); and his nephews, Kenneth Earl Douglass (Sue M.), Patrick Branin Douglass (Brian Scott Archimbaud), Michael Earl Douglass (Robert Martin, Jr.). Our family is forever grateful, as was Jack, for the warm and compassionate care extended to him by Dr. James Willerson, M.D. and the loving care of the Texas Heart Institute clinic staff, Dr. Shirley Ann Riggs, M.D. and Thelma Canterberry for her dedicated, loving and attentive home care. A celebration of Jack’s well-lived life will be held at First Presbyterian Church at a date to be announced. In the interim, you may opt to receive updated service information by selecting the “Receive Notifications” icon below. In lieu of customary remembrances, memorial contributions in Jack Douglass’s name may be directed to Prayers of the People (POP), P.O. Box 22262, Houston, TX, 77227; to The WorkFaith Connection, 4555 Dacoma, Suite 200, Houston, TX,77092; or to First Presbyterian Church Houston, 5300 Main St., Houston, TX, 77004.
See more See Less

In Memory Of Jack Chambers Douglass