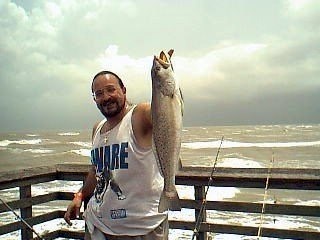 Khaled departed this earth peacefully from a heart attack he suffered in his sleep August 27, 2019; his mother Nuha survives him and brother Omar. Khaled was born April 4, 1963 in Beirut, Lebanon, the eldest of son of Kamal and Nuha Marchi. He graduated from the International College (I.C.) in Beirut in 1981, received his Bachelor’s degree in Chemical Engineering from the University of Texas in Austin in 1985 and received his MBA from Rollins College in 1987. He headed the University of Houston’s Financial Research Center for over 20 years. Khaled loved reading, music, fishing and good food. He was quite an intellectual and fluent in many subjects ranging from politics to art, music to sports. He was an avid angler and spent most of his weekends in Galveston fishing. He had a wonderful sense of humor and was a great believer in family despite the fact that he never married or had children of his own. He attended most of his cousin’s son’s hockey games no matter how late they started, where they were held, how far he had to drive, or how cold the ice rink was. When his cousin had emergency surgery, Khaled visited often despite the fact that he lived more than 30 miles from the hospital. Funeral services to be held on Saturday September 7 at 2 PM at Chapel of Eternal Peace at Forest Park Funeral Home at 2454 S. Dairy Ashford, Houston, TX 77077. We are all the poorer for losing such a wonderful son, brother, cousin and friend.We will remember Khaled for the jolly, wonderful, sharing person that he was. A teddy bear as his cousin described him.
See more See Less

In Memory Of Khaled Kamal Marchi