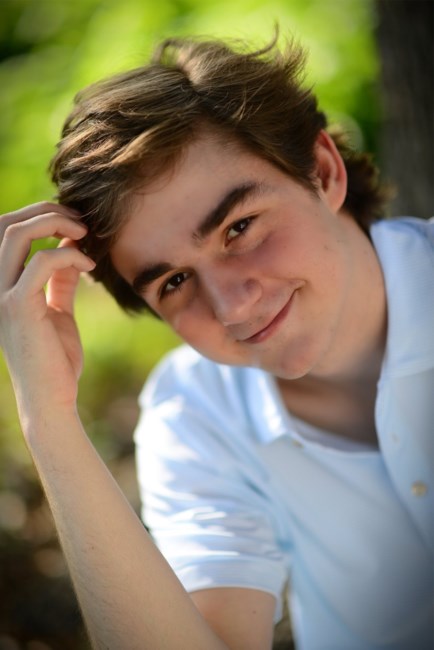 Landon Cade Poindexter - Obituary Landon Cade Poindexter, age 19 of Houston TX, passed away surrounded by his loved ones on August 15, 2019. Born on May 25, 2000, Landon entered the world with little notice and a quick arrival. Landon was a fearless and ambitious young boy whose specialty was climbing; climbing anything he could get a grip on. He started walking at 9 months and had to be moved to a toddler bed very early due to his eagerness to get each day started. As a child, Landon was rarely seen without his stuffed dog Rufus who remained his constant companion. Landon had no fear of heights and often terrified other parents and teachers with his climbing exploits. He was found several times on the roof of his house at age 5 with a grin on his face. Following in his big brother’s footsteps whom he idolized, Landon loved sports and participated in youth and club baseball, basketball, football and soccer. Landon graduated from Houston’s Mirabeau B. Lamar High School in 2018 where he was on the Texan’s baseball team. Landon was to start his sophomore year at the University of Texas at Austin this fall. He was a proud member of UT’s Kappa Sigma Fraternity where he served as a Houston rush captain. He fell in love with the city of Austin, especially Lake Travis. Those who knew Landon, lost a shining light in their lives. He was a gentle soul and was loved by so many. He will be missed every day. Landon is survived by his parents, Ryan and Melissa Poindexter, brother, Mason Poindexter and dogs, Molly and Lizzie. Grandmothers Patricia Ann Poindexter of Boerne, Texas and Mary Ann Roberts of Zachary, Louisiana. Uncles Jason Poindexter and Jonathan Roberts (Leslie). Aunts Claire Poindexter and Christina Ard (Mike). Cousins Aubri, Eli and Mia and many friends. Landon is preceded in death by his Grandfather’s John Bralley Poindexter and Charles Merrill Roberts and his beloved dog Fletcher. A celebration of Landon’s life will be held at Crosspoint Church, 4601 Bellaire Blvd on Thursday, August 22 at 1:00 PM. The family is asking that those in attendance dress casual (jeans or casual pants) with a white shirt to honor Landon’s love of wearing white clothing and shoes. In lieu of flowers, please consider a donation in honor of Landon to the following organizations that he cared so much about: Scholarships benefiting members of the University of Texas Chapter of Kappa Sigma (501(c) 3) Tau Trustees - Educational Foundation Post Office Box #5021 Austin TX 78763 FSH Muscular Dystrophy Society Fshssociety.org
See more See Less

In Memory Of Landon Cade Poindexter