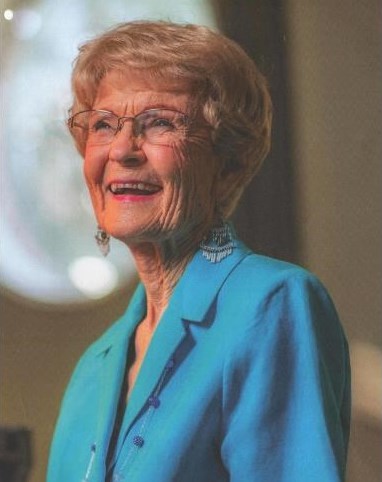 Lavonia Redden Duck greeted Jesus on Saturday, September 17, 2022. Lavonia (or “Honey” as she was affectionately known by her grandchildren and others) was born in Plainview, Texas on September 2, 1931 to Willie (Ramey) and Fate Redden. She was a devoted wife and loving mother to three children. Lavonia was known for her thoughtfulness and intentionality, loyalty, service to others, and most importantly, devotion to Christ. She was always sending thoughtful cards and notes to friends and family. She loved collecting ducks, playing the piano, playing dominos, iced tea, and people. To know her was to love her, and you could often here her telling her friends and family, “love you forever”. From an early age, Lavonia’s life was marked by service to Christ as she was born while her parents were attending Walyon College to be prepared for ministry. Lavonia graduated Abilene High School in 1948 and attended Hardin Simmons University where she met the love of her life, Roger Duck. They were married in May of 1950 and began their pastoral assignment at Hamby Baptist Church. After loving and serving the congregation for four years, Roger and Lavonia moved to Fort Worth so Roger could attend Southwestern Theological Seminary. During these years, they continued to feel God’s calling to foreign missions, as they had since before marriage, and soon after the birth of their third child, they were appointed by the Baptist Foreign Missions Board to serve overseas. In 1960, they arrived in Columbia with their three young children. After four years as missionaries, they returned to the states and were invited by the foreign missions board to open the first personnel mission office in Forth Worth, Texas. As time passed, Lavonia set herself apart as not only a devoted wife, mother and follower of Christ, but also an intelligent and accomplished woman as she earned her master’s degree and PhD joining Roger as a professional counselor. In 1975, Roger and Lavonia made pioneering efforts in Christian counseling and moved to Houston to work at the newly opened Center for Christian Counseling. This move to Houston brought them to find their calling in Christian counseling and led them to their beloved church family, Tallowood Baptist Church, where they served for over 42 years and made lifelong friends. A few years later, Roger and Lavonia would open their own counseling office where they would diligently and happily work until their retirement in 2014. After Roger passed away in 2015, Lavonia left their home at Parkway Place to move closer to her daughter in Dallas where she made wonderful new friends and became a beloved member of the Five Star community. No surprise to those who know her, Lavonia was voted “resident of the month” at both facilities she lived at. Lavonia has said that she was “fortunate to know the Lord, to have a wonderful husband, three terrific children, seven super smart and beautiful grandchildren and seven precious great-grandchildren.” Her life is a beautiful testimony to God’s goodness and faithfulness, and her family is thankful that she is now singing and dancing in Heaven with her sweetheart. She is survived by her children – Roger Duck, Randy Duck (wife Sherma), Denise McCombs and honorary son, David Tatum (wife Dawn). She is also adored and remembered by her grandchildren – Cimbrey Brannan (husband Mark), Nick Duck, Amber Kotschi (husband Nate), Wade McCombs (wife Ali), April McCombs, Justin Duck, and Travis Duck (fiancé Bailee); honorary grandchildren – Renee Devreaux and Joshua Tatum; and great-grandchildren – Zane, Elise and Caroline Brannan, Georgia and Owen Kotschi, and Todd and Marie McCombs. A visitation for Gladys will be held Friday, September 30, 2022 from 5:00 PM to 8:00 PM at Memorial Oaks Funeral Home, 13001 Katy Fwy, Houston, TX 77079. A memorial service will occur Saturday, October 1, 2022 at 10:00 AM at Tallowood Baptist Church, 555 Tallowood Rd, Houston, TX 77024. A graveside service will occur Monday, October 3, 2022 at 10:00 AM at Houston National Cemetery, 10410 Veterans Memorial Drive, Houston, TX 77038. Fond memories and expressions of sympathy may be shared at www.memorialoaksfunerals.com for the Duck family.
See more See Less

In Memory Of Lavonia Duck