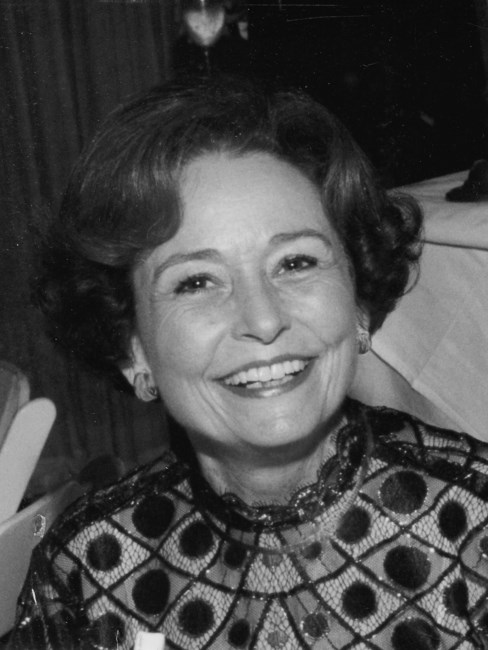 Lucy Gray Arnold, loving wife, mother, grandmother, great-grandmother, and friend, died peacefully on Wednesday, the 14th of September 2022, surrounded by her family in the home where she spent all but a few of her 97 years. Lucy Gray was born in Waxahachie, Texas on the 25th of March 1925. After being crowned Miss Hudson-Essex at the age of three, she and her family moved to Houston. Lucy graduated from Lamar High School and attended The University of Texas at Austin, where she majored in English. At Texas, her favorite memory was living in the Pi Phi house with many women who remained lifelong friends. During her tenure at UT, there were very few men because most of them were serving in World War II. Upon graduating in three years, Lucy was elected to Phi Beta Kappa. While an undergraduate, one of her English professors called her into his office and said, “Miss Gray, I have never had anyone consistently cut my class and excel so beautifully. I need for you to teach Freshman English to soldiers returning from the War.” Lucy’s reply was that they knew everything about the world, and she knew nothing. Her professor’s answer was that they did know a good bit more than she did, except for one thing: Freshman English. Thus, she became a professor at age 20. While working on her thesis for her Master’s in English, she met Buck Arnold, whom she married in 1948. Having written only half of her thesis, she decided to complete it in 1968. She discovered that doing so required commuting to Austin. With three children still in school, she decided to prioritize her family. Lucy was a born leader and was consistently elected President of many organizations. One of her great joys was teaching English as a Second Language at St. Luke’s United Methodist Church, where she was a devoted member since its founding. She was also a recipient of the church’s Distinguished Life Award. For many years, Lucy served on the board of DePelchin Children’s Center. Lucy consistently won blue ribbons for her miniature flower arrangements that she entered in shows as a member and President of the River Oaks Garden Club. She truly loved teaching Provisionals the basics of flower arranging. Her favorite hobbies were tennis, traveling, reading, bridge, Mah Jongg, flower arranging, and spending time with her family and friends, particularly in Chautauqua Park in Boulder, Colorado. Lucy is preceded in death by her parents, Lucinda Hill Gray and Archibald Duncan Gray; her brother, Archibald Duncan Gray, Jr.; her husband of 45 years, William Buck Arnold; her daughter, Elizabeth Hill Arnold; her great-granddaughter, Isabel James Davis; her son-in-law, James Anderson Elkins lll; and her decades-long housekeeper and friend, Marie Herndon. She is survived by her three daughters and a plethora of grandchildren and great-grandchildren: daughter Lucinda Gray Arnold Brown (husband, Dick Terrell Brown) and granddaughter Lucinda Steck Greenlee; daughter Georgia Anne Arnold Suman (husband, John McLean Suman) and grandson John McLean Suman, Jr. (wife Melissa Crow Suman) and great-grandchildren Barbara Morgan Suman, Oliver William Suman, and Waverly Ann Suman; granddaughter Elizabeth Buck Suman; daughter Mary Virginia Arnold Elkins and granddaughter Margaret Wiess Elkins Davis (husband William Warren Davis) and great-grandchildren Benjamin DuBose Davis, Anne Catherine Davis, William Warren Davis, Jr., James Elkins Davis, John Walker Davis, and Charlotte Isabel Davis; grandson James Anderson Elkins IV (wife Margaret Schwethelm Elkins) and great-grandsons James Anderson Elkins and Henry Wiess Elkins: grandson Buck Arnold Elkins (wife Ashley Howard Elkins) and great-grandson Otto Wiess Elkins; grandson John Caldwell Elkins (wife Mary Tapscott Elkins); grandson Harry Carothers Elkins (wife Allison Bing Elkins); grandson Samuel Hill Elkins; and granddaughter Lucy Gray Elkins. Also surviving “Aunt Lucy” were many nieces and nephews, whom she adored. The family wishes to thank Lucy’s long-time caregivers, including Charlene Linder, Arlene Caguioa, Leah Cacho, and Stephanie Cloud. A memorial service is to be conducted at two o’clock in the afternoon on Tuesday, the 20th of September, at St. Luke’s United Methodist Church, 3471 Westheimer Road in Houston, where Dr. Thomas J. Pace lll, Senior Pastor, is to officiate. KINDLY NOTE: Those unable to attend may view her memorial service by visiting Lucy’s online memorial tribute at GeoHLewis.com and selecting “Join Livestream” icon in the “Services” section. Prior to the service the family will have gathered for a private interment at Forest Park Westheimer. In lieu of customary remembrances, the family requests with gratitude that memorial contributions in her name be directed to St. Luke’s United Methodist Church, P.O. Box 22013, Houston, TX 77227-2013; to DePelchin Children’s Center, 4950 Memorial Dr., Houston, TX 77007; to River Oaks Garden Club Forum of Civics Foundation, 2503 Westheimer Rd., Houston, TX 77098; or to her friends’ favorite charities.
See more See Less

In Memory Of Lucy Gray Arnold