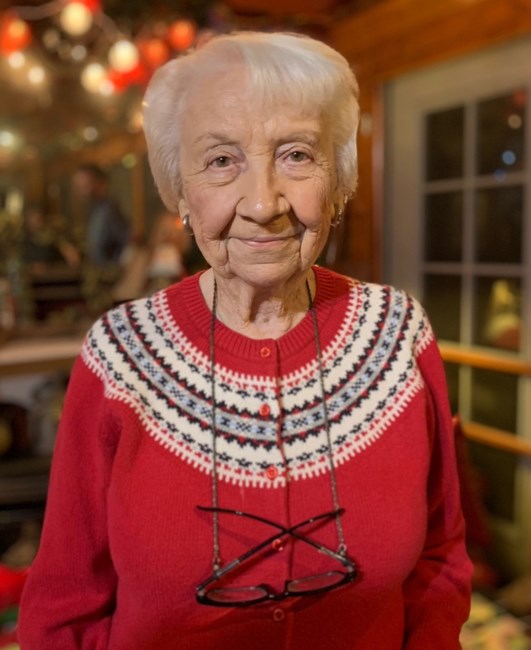 Our Lord picked one of His special flowers, Rita Nancy (Iandola) Amador, to add to His heavenly garden on May 11, 2022. Rita was born on January 22, 1923 in the City of Brotherly Love, Philadelphia Pa. She grew up enjoying childhood at Pennypack Park near her home during the Great Depression. Her mother passed away when she was 16 which was a devastating blow for this young girl. After high school she attended a local business school and then secured a Comptometer Operator job in the Accounting Department at The Goodyear Tire and Rubber Company. She met her future husband, Raymond O. Amador, at an USO dance after the war. They were later married at her childhood home on June 19,1948. 1949 was the year they moved to Texas to start their new life in Houston. They joined St Rose of Lima Church in 1950 and in later years she donated time to the Alter Society. After raising her three children, she went to beautician school and received her certification to worked as a beautician for seven years. She then decided to go back to office work and landed a job with HISD in 1973.She worked in three different departments and retired from Facility Planning Department. Rita remained very active during retirement by joining Silver Sneakers at the YMCA, taking up square dancing and volunteering at Ministry Assistance of the Near Northwest Alliance (MANNA) twice a week well into her nineties. Rita loved being with her grandchildren as much as possible and she always made sure everyone left her home with a full stomach. She was a dedicated pet owner. She has shared her entire life with various pets such as rabbits, pigeons, numerous dogs and many cats. Rita was an accomplished artist, who painted beautiful landscape and realistic water scenes. These wonderful paintings grace the walls of her son's, daughter's grandchildren's and friend's homes. Rita is survived by her son Richard (Rick) Amador and his wife Brenda, and two daughters Nancy Wilcox and Donna Walton, six grandchildren Lori and Michael Amador: Katie and Matthew (Matt) Wilcox and his wife Leslie; Grant and Spencer Walton. Preceded in death by her husband Raymond, parents Philamena and Carmen Iandola, her brother Constantine Iandola, sisters Grazie and Filomena Grazia (Dolly) Killeen. In lieu of flowers, donations may be made to St. Rose of Lima Church, Friends for Life Animal Shelter or a charity of your choice.
See more See Less

In Memory Of Rita N. Amador