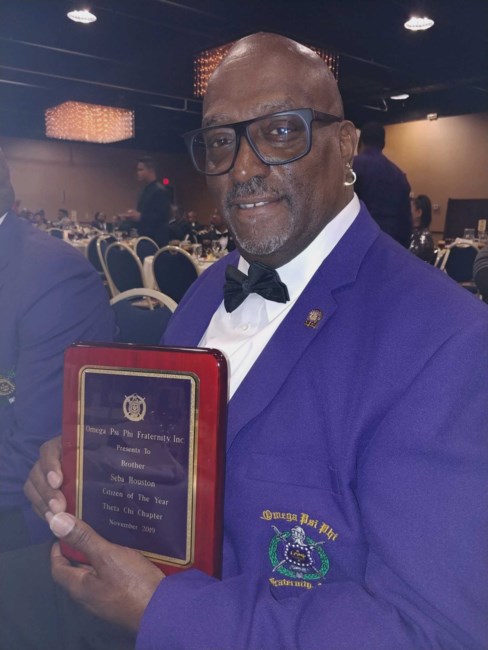 Seba Houston was born on September 18,1959 to parents LC Houston and Hannah May Houston in Denver, Colorado.

He was a 1977 graduate of Manual High School. During his high school years Seba was a member of the Elks and Syrian Drum & Bugle Corps.

After graduation Seba served in the U.S. Army as a Second Lt in the 1st Cavalry Division. Seba began his career as a Music Educator which spanned over 30 years and taught at several school districts in the State of Texas. At the time of his death Seba was employed at Donna Lewis Elementary school. While there he served as a choir director; FAME team leader; Spring ISD Honor Choir Directory, and as a Member of the Superintendent advisory board. Seba’s passion for teaching music left a lasting legacy for many of his students.

Seba had some hardships along the way and he sought treatment from Alcoholic Anonymous /Cocaine Anonymous. Seba would often quote the mantra of AA. “God is either everything or He’s nothing.” At the time of his death, Seba was celebrating nine years of continuous sobriety. Seba sponsored many and was committed to being a mentor to others facing addictions. He served many leadership roles within the organization.

His most recent affiliation with Omega Psi Phi Fraternity Inc. was with the Theta Chi Chapter where he served as Keeper of Peace for every fraternity meeting for the last 5 years. Seba was appointed to serve as the adviser for the Rho Theta Chapter of Omega Psi Phi at Prairie View University until he became an At- Large member after receiving his Service Award for 40 years of commitment to the fraternity. He also chaired the Que Nation Tailgate during the PV Homecoming for 3 years.

Seba was preceded in death by his father LC Houston and his sister Debbie Hayes. He leaves to cherish his memory his daughter MyKayla Searles-Houston; mother, Hannah May Houston; sisters Leah Houston, Miriam Holmes, Ruth McKinney and Rachelle Houston; his only brother, Samuel Lee Houston; an uncle, an aunt, nieces, nephews, cousins, and a host of close friends who will all miss him dearly.

In Memory Of Seba HOUSTON