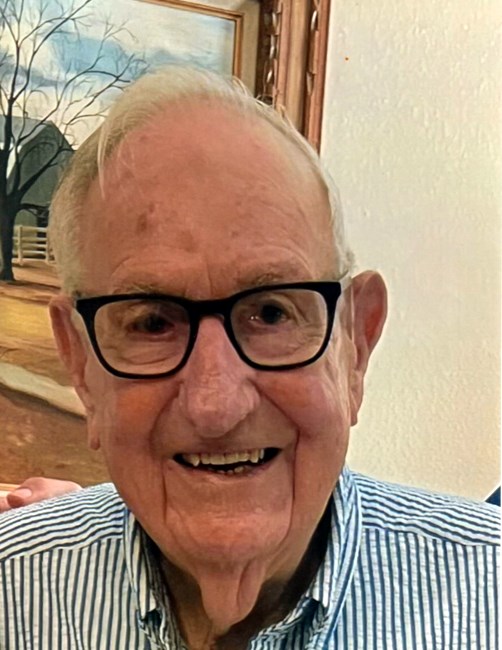 Wilfred A. “Bubba” Wehman, 97, passed away peacefully at home and joined our Heavenly Father on July 28, 2022. He was preceded in death by his loving wife of 63 wonderful years, Theo Wehman, who passed away in April 2010. He survived by daughter Gayla and her husband Chuck of Edmond, OK; and Terri and her husband Mike Pechacek of Magnolia, TX. He had four grandchildren: Kristin and husband TC Cuddus; Allison and husband Jerry Ramsey; Shannon and husband Axel Lindholm; and Kyle Pechacek. Even more blessings followed with nine great-grandchildren: Matthew and Samuel Cuddus; Leslie, Zavier, Elijah, Chloe and Miles Ramsey; and Sadie and Owen Lindholm. Bubba was born August 31, 1924, in Cuero, TX to Rose and A.G. Wehman. He was also preceded in death by his sister, Vernice Woodley. His family moved to Brenham, TX when he was three. He graduated high school in 1941 and attended Blinn College for one year, then went to work as a welder at the Houston Shipyard working on Liberty Ships. In 1943, he completed Army basic training at Fort Hood and worked in an ordinance company that repaired small arms and tanks. He spent a year in England, France, Holland, Belgium and Germany including the Battle of the Bulge. After the war, he attended Sam Houston State University and received a BBA. He married Theo Harcrow on April 3, 1947. For six years, he worked for the Humble Oil and Refining Company at the Katy Gas Plant where he and Theo had many happy memories. In 1957, the family moved to Spring Branch and Bubba worked for Exxon in the accounting and tax departments until retiring in 1983. He continued working for Exxon as a consultant on a team assigned to tax litigation issues for the Alaskan Pipeline until 1990. Bubba joined Fairhaven United Methodist Church in 1962. The family was active and he served in many capacities with the church. After living in Spring Branch, Bubba and Theo moved to the Riverview Place community and they made many special friends. He continued his propensity to lead by serving in several positions on their governing board. Following retirement, he and Theo continued to travel extensively with family and friends. Wherever they were he never passed up an opportunity to get out on the dance floor. He found great joy in fishing, hunting and golf where he scored a hole-in-one. He never met a stranger. Many times went to a golf course alone and joined up with other players and made lasting friends. In late 2017, Bubba begrudgingly left Riverview Place and relocated to the Village of Gleannloch Farms in Spring, TX. He did not want to leave his old friends and routines, but it wouldn’t be long until he would admit that the move was a fantastic decision. Once again, he found himself surrounded by a group of close and lasting friends, including Marlene Suter. He and Marlene shared many dinners, happy hours and outings together, living their lives to the fullest. Bubba is lovingly remembered as having a sparkle in his eye, a smile on his face and a chuckle in his heart. As his family, we knew him to always be there for us. He was a good and decent man and a role model for all of us. In lieu of flowers, please make a donation to a charity of your choice in Bubba's honor.
See more See Less

In Memory Of Wilfred A. "Bubba" Wehman