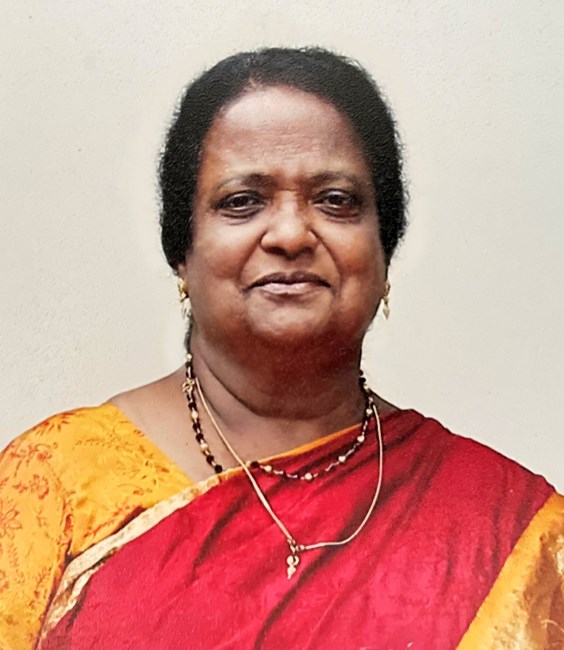 Leelamma John was born on August 18,1943 to late C.M. Thomas and late Rachel Thomas at Cherukathara house in Ranni, Kerala, India. She completed her nursing studies in Sassoon Hospital in Pune, India. On September 10, 1970, she married John George. They were married for 52 years. She immigrated to the United States in 1975 and took residence in Philadelphia, Pennsylvania. She worked as a registered nurse at St. Joseph’s hospital and other places for 30 years. Leelamma John was known for her compassion, hospitality, humor, and spiritual strength. While she enjoyed cooking, gardening, visiting family and friends, her passion was to live for Jesus. She was a firm believer in Christ and was active in the various ministries of Christos Mar Thoma Church such as Sevikha Sangham, Edavaka Mission, neighborhood prayer meetings, etc. She is survived by her husband John George, two sons Stanley John and Dennis John, daughter-in-law Anisha John and two grandchildren Selah John and Noah John. Her siblings are late Kuttyamma Samuel, late Matthew Thomas, George Thomas, Ammini Mathai, and Annamma Chacko. Till the very end Leelamma served Jesus. Her last act of service was to cook a dish for the neighborhood prayer meeting, which she regularly attended with her husband, after which she departed from this world and into the arms of Christ. “For to me, to live is Christ, and to die is gain.” Philippians 1: 21 𝐋𝐢𝐯𝐞 𝐎𝐧 https://www.sumodjacobphotography.com/Live or https://www.youtube.com/c/SumodJacobVideoPhotography/live Fond memories and expressions of sympathy may be shared at www.lambfuneralhomeinc.com for the John family.
See more See Less

In Memory Of Leelamma John