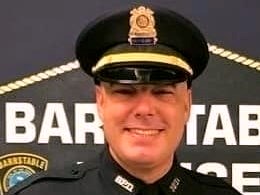 Jason Everett Sturgis, 42 passed unexpectedly with his wife Sarah Jane Sturgis at his side. Jason was an immensely passionate man who loved his children within the deepest depths of his soul. Jason was born in Springfield Massachusetts, as a child he lived and went to school in Palatine Illinois, and returned to Massachusetts when his family settled in West Barnstable. In 1994, Jason graduated from Barnstable High School making him the fourth generation of Sturgis’s to do so. Nineteen years ago, Jason started his career as patrolman with the Town of Barnstable Police Department. Shortly thereafter he married the love of his life, Sarah Jane DeCenzo and started his family. During the course of his career he attended Curry College and earned a Bachelor of Art’s degree in Criminal Justice. Jason was intensely dedicated and proud of being a police officer and always strived to be professional and educated in every aspect of his work. Jason returned to academic studies and earned a Master of Criminal Justice from Curry College all while working and raising his family. In 2017 Jason Sturgis was appointed to the Rank of Sergeant and commanded several shifts at the police department. Jason truly enjoyed his role as leader supervising and mentoring the men and women under his command. Jason worked in many positions at the police department patrolling the streets of Hyannis in the bicycle division, working in detectives, but his most passionate and life changing role was working on the CIU, Community Impact Unit. Jason advocated for those who could not seek help on their own. He dedicated his time and professionalism to assist the homeless and those who suffer from physical, mental, or behavioral deficiencies. This was the most rewarding position in his career and his ability to change people’s lives for the better was the true measure of Jason as a man and a police officer. Jason found solace in playing golf, boating, spending time with family and friends at Sandy Neck Beach, his peaceful place. As a dedicated father, he spent his time with his family participating in every aspect of his son’s hockey program as well as his daughter’s athletic cheer competitions. Jason was a friend to everyone he met, but he surrounded himself with a close circle of friends that he respected and loved like family. Jason is survived by his wife, Sarah, their three young children Charlotte, Keith, and Paige Sturgis. He is also survived by his mother and father, Barry and Nancy Sturgis and his aunt Winogene Whyte of West Barnstable, brother Barry Jr. and his wife Nicole of Marstons Mills, sister, Kimberly McDowell and her husband John of Hingham, MA, and his sister Allison Tucker and her husband Jeff of Lemont, Illinois and many nieces and nephews. A celebration of Jason’s life will be held on Tuesday July 16th at 10 a.m. at Barnstable High School 744 West Main Street in Hyannis. For anyone that is wishing to donate to the Sturgis Family Fund, please make checks payable to "BPA - Sturgis Family Fund" and utilize any of the following methods: Visit any local Rockland Trust branch and make a deposit into the account titled "Barnstable Police Association, PO Box 241 Hyannis, MA 02601, or Drop off the donation at the Barnstable Police Department, or DONATE ONLINE BY CLICKING THE LINK BELOW: https://www.gofundme.com/f/sturgis-family-fund To leave an online condolence, please visit www.doanebealameshyannis.com
See more See Less

In Memory Of Jason Everett Sturgis