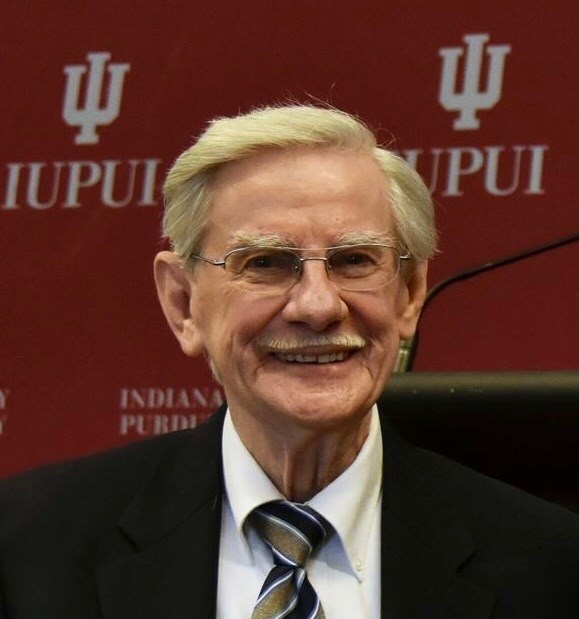 Dr. George K. Stookey, of Indianapolis, passed away on January 5, 2022. A beloved father, grandfather, and husband of nearly 67 years, and an esteemed scientist, Dr. Stookey was born November 6, 1935, in Waterloo, Indiana, to Emra G. and Mary C. (Anglin) Stookey. He grew up in Milford, Indiana, and married Nola J. (Meek) Stookey. A lifelong Indiana resident, Dr. Stookey received his B.S. from Indiana University in 1957 and went on to receive his M.S.D. in 1962 and his PhD in 1971. As a world-renowned dental scientist, he spent 37 years on the faculty in the Department of Preventive Dentistry at Indiana University School of Dentistry. During this time, he served as Associate Dean for Research, Director of the Oral Health Research Institute, Acting Dean, and Executive Associate Dean, and he was promoted to Distinguished Professor in 1998. He authored or co-authored nearly 300 publications in scientific journals, conducted almost 400 presentations at scientific meetings, and made contributions to dozens of textbooks and reference books. His commitment to dental research earned him numerous accolades, including the International Association for Dental Research Distinguished Scientist Award for Dental Caries Research (2002); the E. W. Borrow Memorial Award from the International Association for Dental Research (2005); and the ORCA-Zsolnay Prize for research in Cariology from the European Organization for Caries Research (2007). In 2017, he was recognized with the William J. Gies Award, dentistry’s preeminent recognition, for his innovation in dental education, and in 2021, Indiana University bestowed the IU Bicentennial Medal to Dr. Stookey. He also holds more than 20 U.S. and international patents. After his retirement from IU in 2001, his ownership of Therametric Technologies, Inc. began, with his passion for dental research continuing through his later years. Dr. Stookey was a friend and mentor to many. Yet despite his vast professional accomplishments, he will be remembered above all as a family man: a loving husband, and a devoted and attentive father and grandfather. He is survived by his wife Nola J. Stookey; his children Lynda Howard, Lisa (Brian) Hoover, Laura (David) Bone, and Kenneth (Michele) Stookey; his grandchildren Evan Howard, Emily (Justin) Huffman, Elliot Howard, Alison (Bart) Collins, Erika (Jonathan) Velasco, Nathan Hoover, Rachel (Michael) Perez, Landon Bone, Isabella Stookey, and Madeline Stookey; and nine great-grandchildren. A family service was held on January 10, 2022, at Crown Hill Funeral Home with burial at Crown Hill Cemetery.
See more See Less