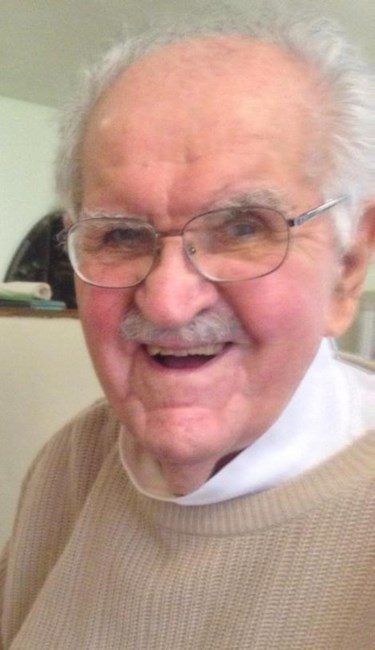 Stanley Joseph Peloza (Sgt. Maj., USMC, Ret.) May 16, 1919 – August 20, 2017 A loyal son, a loving husband, a doting father and grandfather, a faithful friend, a mentor and helping hand to all in need, an immigrant, a patriot… these are just a few of the roles that characterize the man that Stan was. Born 1919 in Vele Mune, Austria (now Croatia), to John and Anna (Zadkovic) Peloza Tonce, Stan immigrated to the U.S. in 1929 and, at age 10, was the spokesman for his family at Ellis Island. First and foremost, he was a family man. Stan married his lifelong love, LaRita Inez Russell, fathered his well-cherished daughter, Stana Jo (“Jody”) Peloza Bentz, marveled at and doted on his beloved grandson, Blake A. Peloza Bowman. As a patriarchal figure, he kept far-flung relatives connected from Australia to Costa Rica to the United States to Canada to Italy to Germany to Austria to Dalmatia to Serbia to Croatia. Enlisting in the U.S. Marine Corps at age 17, he served for 31 years, retiring as a Sergeant Major. He was a “China Marine” in Peking (now Beijing), 1937-1941. Stan served in four wars: Sino-Japanese War; WW II in the Pacific theater; Korean Conflict in Intelligence; and Viet Nam, where he oversaw the establishment of the demilitarized zone in Da Nang. As a civilian, Stan pursued a second career in hospital administration. After “retiring” a second time, he volunteered as a certified counselor for the Senior Health Insurance Information Program (SHIIP) in two major Indianapolis hospitals until age 92. A highlight for Stan was as a privileged participant in the inaugural Indianapolis Honor Flight to Washington, D.C. (At 92 years of age, he could still wear his uniform!) In his last years, he considered himself “blessed” to have his “guardian angels” (caregivers) watch over him and to be able to stay in his own home. Stan lived up to the Marine Corps motto, “Semper Fidelis”, and was always faithful to his God, his family and his country, and was “gung ho” to the very end. He was one of the “greatest generation” and represents the end of an era, but what a legacy he leaves for each of us! Stan is survived by his daughter, Jody P. Bentz (Frank), his grandson, Blake A. Bowman and numerous cousins and untold friends around the world. Interment with full military honors occurred September 1 at St. Mary Cemetery, Evergreen Park, IL. Should you wish to memorialize Stan, three of his favorite charities are as follows: Little Sisters of the Poor, 2345 W. 86th St., Indianapolis, IN 46260; Sisters of Providence, St. Mary-of-the-Woods, IN 47876; Marine Corps League, PO Box 1835, Merrifield, VA 22116.
See more See Less

In Memory Of Stanley Joseph Peloza